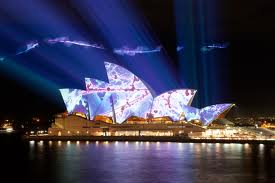 Autism Day at the Opera

My son is 43, has autism and we are desperate for help. So I appreciate the need for autism awareness and DIRECT ACTION.

For autism awareness day, I’ve learned some people are buying blue mascara and lipstick to spread “awareness about autism.”

Others are using April 2nd as a “retail therapy” day to buy new clothes in blue.

How will Autism Awareness Day impact the lives of people with autism and their families?

For the life of me I can’t imagine why blue lights at the Sydney Opera House, The White House, Empire State Building or the house next door will change a thing–except for the blue light bulb retailer.

Put Time and Money where your Mouth is

It makes more sense to me, that the expense of buying blue lights, hiring a team of workers to install and operate those lights for one day–is just dumb and a waste of opportunity.

Using those same dollars, the Opera House could invite families or parents to an evening of the opera. Sure, the Sydney Opera House might not get the same press, but the impact would be direct and measurable. Real families would have the treasured opportunity for a night of respite.

I understand the White House is meeting with some advocates for autism which is an action step–much more useful in my opinion to a blue illusion.

The Empire State Building–well, there were those romance flicks with the hearts on Valentine’s Day, but really?

Now good people and advocates are working hard for all this autism awareness, and I know my skepticism sounds like sour grapes or something mean spirited.

I’m just tired of being used and being the victims of charity.

Past Experiences with the Charity Model and hype

One time our family was on a trip to the Smokey Mountains. My husband Tom, an avid golfer, passed a golf course which had a huge sign over the gate “Welcome Special Olympics.”

Tom went to the front desk and asked if Aaron, our son with the label of autism, could ride in the golf cart as he played golf.

The desk clerk looked confused. Tom said Aaron would be sitting next to him and would not even be on the course. He also told him Aaron has accompanied him on other golf courses and it worked out fine.

As the clerk continued to stammer around–Tom pointed to the “Welcome Special Olympics” sign.

The young man shook his head,

“Tomorrow, our Special Olympic fundraiser is for radio/TV personalities, the Governor and all kinds of influential people coming to play golf. NOT–those kind (pointing at Aaron). This is our public relations and publicity event for the year. It isn’t for them. We don’t allow them on the course.”

At a time when getting services for children and adults with autism and their families is desperate, my hope for tomorrow is that people will spend a couple minutes with actual people who have the label of autism.

If you want to dress up in blue from head to toe, with blue eye shadow and lips, more power to you. But somewhere in the day, actually touch a real person. Make a difference in an actual life.

Make the Autism Awareness Day, more than a media moment.

Take the opportunity to begin change–one on one.

What do you think?

Are you wearing Blue? Are you going to spend a couple minutes with an actual person who has the label of autism?