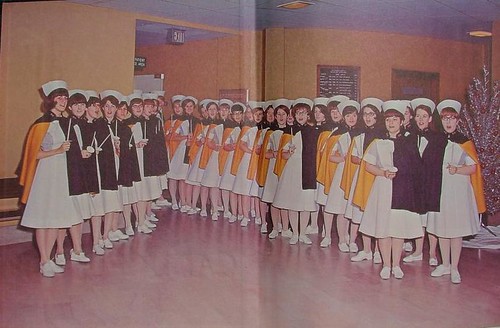 Nursing and Caring during WWII

My mom became a nurse during WW II. One of her first assignments involved going into the homes of elderly people in the Washington, DC area. Many of these older Americans were by themselves because their adult children were serving in the war. These were regular patients she saw every week and she would give them their shots, medication, baths, change bandages… whatever they needed. Mom told stories about how her best medicine was often listening. They were scared, lonely and she would read the precious letters that came from faraway places and help them write back. One afternoon she was with an elderly couple as the military officers told them their son had been killed in action. She gave each person personal attention and dignity.

Her patients were personal. She knew them and their stories. She cared about them as individuals.

After each home visit, she and her companion (they traveled in twos) would take the bus or trolley cars back to the dorm where all the nurses lived. She had to wash, press and starch her uniform (this was before modern washers and dryers), she had to write her reports (longhand with a pen) and she had to make sure she was inside the dorm before 10 PM or she would be marked a fallen woman and unworthy to be a nurse.

After the war she married my dad and had five children in six years, with another child 4 years later–six children total in 10 years. When the children were all school-age, she again became a part-time ER and Recovery Room nurse.

Mom always loved hospitals and everything medical. Even now at 88 years old, she remembers the names and doses of each of her 15+ medications. She tries to remember the nursing staff but there are too many of them.

This afternoon I stayed in her room while a steady stream of professionals did the prep work for her hip replacement surgery. They had her IV running; she was given preventative medicine for vomiting and acid reflux. She had one tube taped into her artery so during the surgery additional meds could be given without needle pricks. Everything was plastic, disposable, and sterile.

Each of the medical professionals seemed competent and efficient. They explained the procedures, they reassured her that her doctor was the best; they had amazing machines that beeped and whirled. But, even with me standing there, no one cared who mom was. She was the “hip replacement in room 424.”

Again, this was a state-of-the-art hospital with excellent nurses. Everyone was super nice and competent. On the bulletin board near her bed “Helen” was written in large green markers. Each of her nurses also signed the bulletin board so she would know the name of the staff person.

In this game of “name that patient” and “ring-around-revolving staff” It did seem disrespectful that a twenty-something staff person would address her as “Helen” like they were best buds.

In Disability World, we have often dealt with staff whose job was to write a report and then give their expertise as to what was best for Aaron. Sometimes the prejudice and low expections of the professionals are dangerous to the person (click here). As an advocate, I’ve been in meetings when psychologists (they were the worst) would go over their whole report with recommendations for placements or goals and they never even met the person. They claimed to know the person better than the biased parents or teachers…. Advocates always recommend parents bring a picture of their child to the meeting. I know of one case where the psychologist wrote the report up, only to find out he had the wrong person at the meeting.

Today, the company that provides Aaron’s residential care has “Home Managers” who oversee Aaron’s life. The “Home Managers” do not have anything in their job descriptions about getting to know Aaron–and since this is just a job to them–they do not do anything that isn’t in their job description. When I forced the one woman to actually meet Aaron, she explained she only did scheduling and paperwork. Yet, she is the person who would be in charge of Aaron if my husband and I got hit by a bus tomorrow; she is the person who signs off on Aaron’s ISP (Individual Service Plan) and she is the one who hires and trains staff. UNBELIEVABLE!

Learning to be an advocate is useful in so many situations. Research says people who are perceived as important, wealthy, or famous get better care than people who are anonymous, weak and ordinary.

As the two nurses maneuvered the hospital bed into the elevator with the soft music and the doors which opened in the front and back, I looked at my mom. Here was this frail 88 year old woman with her white hair mussed in bed head. Her skin kind of draped loosely around her eyes, mouth and neck. She insisted on putting on her lipstick before she went, so her bright red lips were in contrast to her pale waxy complexion.

She was just another old person to these nurses. She didn’t have an important story.

Going from Nurse to Patient to Nurse

On the elevator ride down to surgery, I told the nurses about her history. Suddenly mom was not a nobody. She became a real person—more than just the patient they were fitting into the schedule, the last surgery of the day, the hip-replacement in room 424.

In the elevator ride down to surgery, I shared some of mom’s stories about the changes in nursing, hospitals and medicine. We talked about the old days when mom wore starched white uniforms and hats–not permanent press colorful smocks and gym shoes with disposable covers. Think about it, in the fifties the hospitals were not air-conditioned (it was 85 degrees today) and many hospitals didn’t even have elevators. I told them how she visited the sick and elderly in their homes.

We were in the elevator for probably 4 minutes. That was all it took.

The Human Story Makes the Difference

Now, the old lady “Helen” was a retired nurse who worked when nurses really knew their patients. She was not a stranger; she was a nurse–one of them. She was a pioneer who paved the way for these two women pushing her bed. She was also a future THEM in 50 years when their hair would be mussed with bed-head and they would need caring nurses.

When we reached the doors to the surgery department, I kissed my mom on her red lipstick. This time when the nurse said, “Helen, we’ll take good care of you.” I smiled and knew “Helen” was now a real person and would get both dignity and good care.

Come on, I’m sure you have some comment about hospitals, medical or school professionals and caring?????

Keep Climbing: Onward and Upward,
All the best,