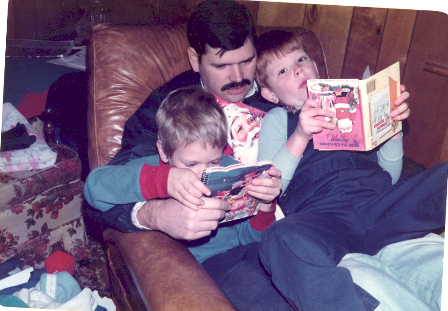 Twas the Night Before Christmas

“Toyland, toyland, magical girl and boy land. Once you cross its borders, you can never return again.” (Babes in Toyland)

Aaron and Tommy got off the school bus and our world changed.

Tommy walked in the front door, threw his backpack in the corner and announced “There’s no Santa Claus.” Apparently, Billy and Josh minced no words on the bus ride home. And, they were third graders who knew these things.

Aaron, my son with the label of autism, went straight to the refridge.

But what is a mother to do?

I got Aaron settled with a snack and his music and then sat next to Tommy on the couch. We both were facing the Christmas tree and feeling pretty glum when he crawled into my lap. That action alone choked me with tears. Tommy was seven years old and seldom let me hold him on my lap any more–yet another reminder my baby was growing up.

Like all parents, I knew this moment would come. And, I wanted to send coal to Billy and Josh for ruining the fun.

I knew this was one of those rite-of-passages, a transformational moment in his young life–but darn. It seemed just yesterday he was three and running down the steps on Christmas morning, diving into the presents from Santa–darn, darn.

For a long time, we watched the reflection of the lights on the tree ornaments and didn’t say anything.

It was a treasured moment but I was desperately trying to think of how to keep the magic. How could I patch up the hole of a Santa that no longer was real?

Sure we’ve had some close calls, i.e. St. Nick and the Batman socks. But this time, there was no going back.

Tommy finally started talking and asked some questions. He said he had suspicions because the whole Santa-goes-around-the-world-in-one-night is a little hard to believe. But, but, but.

There were the things he said: “So there’s no Easter Bunny, or Tooth Fairy…?” “Was God real?”

And the things he didn’t say: “Did all adults lie, trick kids and play games with them?” “Who could he now trust?”

I tried to put myself into his world and think of ways he might understand. My explanation that Santa was a make-believe superhero bombed. Later, I could talk about Jesus and the gifts of the Magi, but that seemed abstract for the current moment.

I’m not sure what inspired me, but as Tommy sat in my arms with his chin on his chest, I suggested Santa was a tradition about giving.

“The Santa tradition” was a fun way for everyone to be an actor in a giant real life magic play. It didn’t matter your age, it was about finding someone who needed cheering up, or needed help and giving it to them.

I told him little kids didn’t understand this, but big kids like him, now got to be part of the fun by becoming a Secret Santa to others. This seemed to make sense to Tommy.

Okay, who could we surprise? Who needed some Christmas cheer?

Tommy’s grandparents had just separated after a long and unhappy marriage. Grandpa had moved into a basement apartment in a not-so-great neighborhood and told the family, “This year I’m keeping it simple and not putting up a Christmas tree.”

So that minute, Tommy started to plan a Christmas makeover for Grandpa’s apartment. Tommy decided to become a Secret Santa.

For the next few days, Tommy spent every minute making decorations, planning how to sneak into Grandpa’s apartment, going shopping for supplies and a small tree….

He decided we needed cookies and put me and Aaron to work.

Aaron was nine years old. If Tommy (two years younger) no longer believed in Santa, then it was no longer age-appropriate for Aaron to believe in Santa either. Tommy was always my measure of “normalization” for Aaron.

I know some parents who, when they are told their child has severe intellectual disabilities or Down syndrome or…console themselves, “Well, at least they will always believe in Santa Claus.”

I know parents, special needs charity groups, care providers and teachers who take adults with disabilities to sit on Santa’s lap at the mall. In groups. UGH!

The RULE for age-appropriate and normalization is: “Would a person without a disability do this?” “Will this activity add or subtract to a person’s positive image in the community?”

In this case, an adult with a disability sitting on Santa’s lap in the mall makes them seem like an “eternal child” not an adult who will live and work as a contributing member to the community.

This is a difficult concept for a lot of people. But this was the right move for Aaron and our family.

On Christmas Eve Tommy, Aaron, Tom and I got the key to Grandpa’s apartment and put on our red Santa hats. In under an hour, we decorated the tree, put holiday towels in the bathroom and kitchen, added colorful plants and pillows to his living room and his favorite snacks in the fridge. Tommy posted his drawings all over the apartment with a note next to a plate of sugar cookies:

I heard you were a good boy this year.

Tommy glowed as he locked Grandpa’s door. As we got into the sleigh (er, car) we giggled, reviewed our Christmas caper, sang carols and drove out of sight.

When we stopped for burgers and fries (even Secret Santas have to eat) Tommy decided to continue wearing his Santa hat. Aaron–not so much. But my babes had transformed.

There was still Santa and giving and Christmas. But they were no longer the “Babes in Toyland.”

From now on, Mom’s IEP for the holidays would have to include our new roles as Secret Santas.

All my best wishes. Ho-HO-HO. Have some fun this holiday and we’ll see you next year.

How did you find out about Santa Claus? What are some of the ways you continue the tradition of giving? Any Secret Santa stories? Any thoughts on normalization and age-appropriate?