BACK to SCHOOL Article 2

To celebrate the new school year here are some of my favorite posts.
Article 1:

Why Do We Go to School?

This is one of my favorite stories–an updated article from when Aaron was 8 years old and Tommy 6. Enjoy! 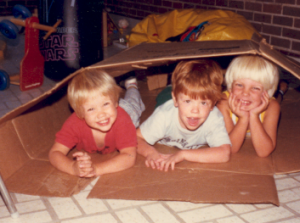 Kids in a Box

It was the weekend before school began and Cincinnati was sweltering from a week of 90 plus temperatures with over 50% humidity.

And partially because most of our neighbors don’t have air conditioning, and partially because we enjoy each other’s company, all the moms were sitting on the porch steps waiting for the street lights to signal the time for baths, bedtime and the end of summer.

Several of the children were busy with final rehearsal for the “Ralph Avenue” version of Snow White and the Seven Dwarfs. Erin was the wicked queen, Allison the prince charming and the younger children Eric, Patrick, Tricia, and my son Tommy were assorted other characters.

The kids ran in and out of the yards wearing their winter caps with the tassels dropping over, trying to look like dwarfs.

After a while, the large cardboard box from Allison’s new stove changed from being used for the stage scenery for dwarfs to a cool hideout for cowboys.

Patrick’s mother was telling us a newspaper reporter stopped by her house to do an interview with “a new kindergartner.” It would be a three part series on Patrick’s impressions before school began, during in January, and a third article after in June.

The poor reporter had a time of it because every time she asked Patrick (5 yrs.) about the imminent kindergarten experience, Eric (6 years and a kindergarten veteran) would give his answer, including a heated discussion about, “Who would be picked for the cookie passer?”

It was so much fun to be watching the kids and hanging out with other mothers but the beginning of school is very traumatic for me because of our continuing problems with the special education school program for my son.

Aaron has the label of autism and severe intellectual disabilities. A new year signals the beginning of another year of battle for inclusion.

But maybe because it was too hot and maybe because I was surrounded by friends, I continued to sip my ice tea and enjoy the normal conversation of my neighbors.

Tricia’s soccer team won every game last year with a very gentle and knowledgeable coach. This year they won their first game but the new coach yelled and screamed and was upsetting the team and their parents. The parents wondered if victory was worth the price?

Tommy went for his school physical and when the nurse asked him to urinate into a cup he burst into tears.

I pointed to the counter and its rows of labeled cups and told him everyone—even grownups–had to do this.

Sobbing he said, “Okay—but I won’t drink it.”

Later he asked, “Mom, why do they need a toilet in there is everyone pees in a cup?”

My friends and I exchanged sale prices on jeans and problem solved about the best backpacks and gym shoes with shoelaces that didn’t need to be tied.

We laughed, reminisced about summer and shared the thunderstorm warnings.

All this time Aaron was walking up and down following the crowd of “dwarfs” as they flitted from yard to yard. He didn’t get a lot of direct attention, yet he was part of the group. For a time they all put on football helmets and Aaron went over, knocked on them to hear the funny sounds and everyone giggled. Aaron got quite excited and even though he is tactily very defensive he allowed them to place the helmet on his head, for a minute anyway.

Tommy brought out his golf clubs and soon Eric and everyone tried a few swings hitting a large flowered ball. Once Aaron was too close and thoughtfully Patrick took his arm and helped him get out of the way and Eric adapted and shortened his swing.

Then the crowd was back down the street again. This time Aaron waited for the abandoned golf club. He bent over and balanced perfectly picking the club out of the grass. He began in his own way to hit the big plastic ball around the yard. Then he too lost interest and headed back down the street to find the other children.

Four years ago, the same day we moved into our home, a group of people on the other side of town filed a lawsuit to protect their neighborhood from the “danger’ of a proposed group home for people who were labeled mentally retarded. I remember my worry of meeting our new neighbors and their reactions. What would be their concerns, fears? Would they allow us into their community?

There have been awkward moments when Aaron would do something inappropriately. But then “normal” “regular” young children have their good and bad moments like the rest of mankind.

Now Aaron was just Aaron and each neighbor had worries about jobs, children, families—the usual. We were a part of their neighborhood, their community.

As the sky darkened and the parents began to gather up the toys, football helmets, golf clubs and the talk again turned toward getting the children to bed so they would be fresh for the first day of school, I couldn’t help but think of how children and adults learn.

We use our creativity for Snow White costumes and playing with discarded boxes. We use our problem solving skills to find sale priced jeans to stretch our budgets. We use skill development including repetitive drill and practice for playing soccer and for picking up golf clubs out of the grass. We build on our experiences and associations whether they are jets and helicopters, cups and drinking, or how we feel about people who are different than we are. We also learn from people, some of whom are rough coaches, some parents, some newspaper writers, and some—neighbors.

School may begin tomorrow but in our neighborhood a whole lot of learning happened tonight. And perhaps, just perhaps—because Eric and Pat and Tommy will grow up with their incidental learning, experiences, associations and relationships with Aaron, the years of battles for belonging, full inclusion and citizenship will be shortened and our war for acceptance will be won.

Sometimes the make-believe lessons of Snow White overlap with the real world lessons of our family. After all, wasn’t Snow White the one who sang: “No matter how your heart is grieving, if you keep on believing, the dream that you wish for will come true.”

Keep believing, keep dreaming and a Happy School Year to All.

Has our dream of inclusion for all kids come true? Certainly more children now have the opportunity. Aaron, Neil Roncker, Jenni Wetzel, Julie McMahon–they were the first kids in the doors of the public schools in Greater Cincinnati. I believe with all my heart they touched the lives of their peers who are now grown and sending their own children off to school.

And some of these young parents became the doctors, teachers, bus drivers and parents of kids with special needs. Our lives really are all part of each other, all part of the circle of life. I hope this new generation feels better prepared. I hope the schools their children attend are also better prepared. I hope our communities are more welcoming to those who have differences.

Please leave a comment so we can celebrate this new year of learning.
What are you thinking about as the school year begins?