A Quarter’s Worth of Advocacy 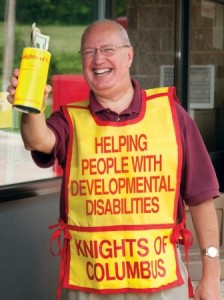 I am going to update some of the better articles I’ve written for my classes, parent newsletters and magazines. Hope you enjoy them.

Since Aaron was young, the language has evolved. When this story took place they used the words, “mental retardation,” then the words become “developmental disabilities” now it would be “intellectual disabilities.” I’m using the original words as I experienced them.

I had just bought some 99 cent grapes, a pound of hamburger, loaf of bread and a couple other items to make dinner for my family when I was met at the door to the grocery by three older men wearing brightly-colored vests and hats with tassels. They were holding little cans and urging shoppers to “Help the mentally retarded!”

I grabbed my groceries and, not even looking up, hurried to my car. As I passed, one man said (in a very superior) voice, “Not all babies are born healthy.”

I felt my face flush and when I paused, he went in for his killer argument, “We aren’t ALL blessed with normal babies, you know!”

Well, that did it. Turning, I said, “I have a child who has the label of autism and I think it is very condescending to have to beg to raise money for quality services. He needs respect for his civil rights, not begging and charity.”

Well, the men and their swinging tassels all stopped and circled me. They were aghast. “What do you mean?”

I thought about just grabbing my bags out of the cart and running to my car, but instead looked him right in the eye. “People who are retarded need real opportunities. They can be valuable workers and contribute to society. Retarded people as objects of the mercy of others reinforces the negative stereotypes of the past. In fact, now we call them people with intellectual challenges and don’t even use the word retarded.”

“But honey, last year we raised over $300,000 in our state.” The man straightened his hat and looked like I had sucker-punched him in the gut. “One-third of that money is going toward adding a retarded adult wing onto Children’s Hospital. Also we began a new women’s group home. We stand here in the rain and cold to help. We are volunteers. We don’t get anything out of this.”

At the entrance of the store a crowd was now gathering. I knew he was probably a nice man only trying to do his Christian duty. He was sincere and dedicated, only ignorant of the principles of normalization and inclusion. The staring and frowning faces of the crowd told me they were on his side. I half expected flying can goods to start stoning me. After all, who takes on God’s Knights right in front of Krogers?

I certainly didn’t plan on making a scene. So, giving the man a smile, I just said, “Well, I serve people who have developmental disabilities in other ways” and tried to push my grocery cart around him.

He gently put his hand on my shoulder and assured me God would take care of me and my son. Then, to show no hard feelings, he put three Won’t you give an extra inch? wooden rulers into my bag.

Well, once again I had done it. My husband is always telling me to lighten up and get a new hobby. For Pete’s sake, here I was in a confrontation in front of the grocery store.

Perhaps next time I’ll just drop a quarter in the cup and make the man happy… but… in the meantime, I’ll work “inch by inch” to replace the poor helpless eternal child stereotype with an image of a citizen with real value, dignity and rights.

How would you handle this? Have you had similar experiences?
The kicker is that Children’s hospital no longer even wants to serve adults with disabilities. Do you think that is a good or bad thing? Also, in 2012, the Knights would be saying, “Help the children with intellectual disabilities,” right?