Building Community: one grocery trip at a time 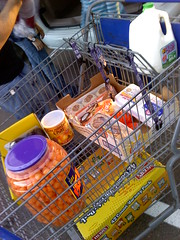 Building Community: One Grocery Trip at a Time

With Aaron, my son with the label of autism, every trip to the grocery is an adventure.

Before we go, I usually do an ecological assessment (click here) and use some of the skills Aaron learned in his functional curriculum when he was in school.

Over the years and with lots of practice, I know what Aaron likes and dislikes. I try to make the shopping trip a good experience for both of us.

We try to go in the morning when the store isn’t crowded. We’ve developed a system where I walk in front of the cart making sure there is no person or display in the way. Aaron then follows pushing the cart with both hands on the handle.

Aaron is really good at following and knows to stop when I stop. He seldom bumps other people or the displays. This is a skill we have worked on for years and practice every week. I am really proud Aaron can do this.

We usually go to the same store.

That way Aaron is familiar with the physical space and layout. He knows the grapes and carrots are on the right front, the bread is in the right back, and after we pick up the milk and yogurt on the far left we will head to the checkout lanes. We usually only buy about ten items so the wait in line is short. We try to build a routine and structure into the experience.

We try to build a relationship with the store personnel.

This store was only a mile from where Aaron went to high school but in the suburbs we rarely see anyone we know. One of the baggers used to be in the special education program. She does a good job and always says hello. Some of the regular shoppers talk to her by name. She is one of our special ed. success stories and has been employed for over 10 years.

But I never know what’s going to happen.

Yesterday we went to the grocery near Tommy’s house because we wanted to let his dog out for him. Even though it was the same chain we always go to, the store was set up differently. STRESS.

I thought noon on a Sunday would be okay, but it was packed and everyone was in a hurry because the football game was due to begin at 1 PM and the only way to survive a football game is with lots of beer and snacks. STRESS. STRESS.

Being ready for surprises

Aaron did pretty well. We got our groceries and went to the car. I was putting the bags in the trunk when Aaron started pounding on the roof of the car next to us. He’s never done that before.

The young man was getting his two young daughters out of the passenger side. He looked up and yelled, “Hey, stop that!”

Quickly I grabbed Aaron and was about to get him into his seat when Aaron pushed me away and again pounded on the top of the car. This time the guy came over to our side of the car.

I started to apologize when the guy said, “Aaron, is that you?”

Aaron gave him a side-ways glance.

I was stunned and didn’t quite know what to say. I looked at the guy and he looked at me, and he repeated, “Is that Aaron?”

There wasn’t much room in the space between the two cars. I took a deep breath and turned Aaron toward the young man. “Aaron do you know him?”

Instead of punching Aaron, the man gave Aaron a high-five.

I fumbled out a, “How do you know Aaron?” and the young man said they went to high school together. He said he used to come into Aaron’s class and take him to the gym. He said he and Aaron used to eat lunch together.

He touched Aaron’s arm and guided him over to the other side of his car and introduced Aaron to his two children who were about 5 and 3 years old. He told them Aaron was a friend from school and then had Aaron give them each a high-five.

Aaron was strangely quiet. He patted the younger child on the head and said, “Ahh.”

I thanked the man for saying hello. He said his name was Todd and he asked a couple questions about where Aaron lived.

We both talked about how Aaron must have recognized him and since he didn’t have any words, he used the pounding on the car to get attention. We both thought that was very clever of Aaron.

When we worked so hard for inclusion for Aaron in the public schools, we dreamed that Aaron would have a community of people who knew and accepted him. People who could see his gifts and strengths.

Every once in a while we have a unique success story that makes all that hard work worth it.

We’ve never expected big monumental experiences. This magic moment where Todd remembers Aaron and thinks enough of him to want to introduce him to his children–that’s big enough.

I hope you will check out a couple of the other blog articles and share your thoughts.
Do you have any community experiences to share? Any magic moments?
Do you think the future will be better for adults with disabilities because of inclusion in the schools?