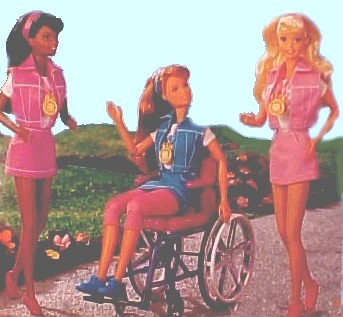 Some of the major stores are already advertising their holiday toy sales. This made me think of Barbie and her friends.

Some say the Barbie doll was the most influential icon of late 20th century American culture. In fact, she rated no. 43 on the 101 most influencial people who never lived (Click here).

Some say Barbie had it all: perfect body, perfect boyfriend and perfect everything.

Many little girls still think Barbie is the definition of beauty and a great role model, after all she has been a presidential candidate, an astronaut, in the arm services, in the business and entertainment worlds. Barbie didn’t even need a phone booth like Superman, all she had to do was change her shoes. In 2009, Barbie brought in $1.2 billion in annual revenue for Mattel.

But in my opinion, Mattel missed a powerful opportunity to be a leader for inclusion and community building–a real chance to make a difference in the world.

Mattel captured the feminist and toy market for “perfect” dolls, but it didn’t do as well with the non-white, “non-perfect” market. In the 1980s Barbie went multiracial and Mattel introduced Black Barbie, Hispanic Barbie and other dolls in their International Collection.

But these new “culturally diverse” dolls still had European features, and to me, seemed to be basically the original Barbie in costumes, with darker hair and skin.

Instead of becoming a leader, promoting sensitivity and understanding, Mattel reinforced the dominant cultural stereotype and dismissed the natural beauty of other races and cultures. A lost opportunity for all of us. Certainly a lost chance to teach tolerance and respect for people with disabilities.

In 1997, Mattel ignored even the basic “People First” language (click here) with Wheelchair Becky. When a little girl with cerebral palsy complained, they renamed the doll Share-a-Smile Becky. Most advocates would say, “Becky” would have been enough.

Like many perfect people, Barbie and Mattel didn’t get past their good intentions. When everyone learned Becky’s long hair got caught in the rungs of her wheelchair, and Barbie’s Dreamhouse and expensive cars were not wheelchair accessible, Mattel folded.

Who wants to be perfect anyway?

But like many people with disabilities, Wheelchair Becky was resilient and found her own friends and adventures.

Last week someone sent me a web update on what Wheelchair Becky has been doing. Click here to join her for a beer and enjoy her wild ride– with Perfect Barbie nowhere in sight.

(Exaggeration is part of humor and comedy. If the pendulum moves a little too far for your taste, remember this is about making Becky more human. I liked that she is shown as an adult…for good or bad. Attitude and change are not child’s play.)

Seeing her here, there and everywhere, the Wheelchair Becky adventures reminded me of the building community activity I did with several classes around the book, Flat Stanley.

Like Wheelchair Barbie, Stanley had an accident that resulted in some physical challenges. But Flat Stanley was also resilient, clever and he uses his unique physical condition to his advantage. Because he can now fit into an envelope he doesn’t have to worry about crowded flights and paying extra for luggage.

If you go to the Hall of Fame (click here) you will see Stanley has been in space, to the Academy Awards, to the White House and many exciting places.

In the picture we see Flat Stanley with a new friend in Kenya. Wouldn’t it be neat to have a pen pal from the other side of the world? Many teachers and school children think this personal connection is the best way to teach about different life styles and cultures.

The Flat Stanley Project is an international literacy and community building activity for students of all ages, teachers and families.

Check out http://FlatStanley.com for student and teacher testimonials, a phone app, templates for Flat Stanley and other characters including Flat Pilgrim, Flat Santa and the newest Flat Mrs. Claus.

For a history of the Flat Stanley project, click here.

My class used Flat Stanley and other Flat characters like Flat Pilgrim, Flat Santa, and the new one, Flat Mrs. Claus to become pen pals to let the children share their cultures with different people as well as practice their literacy skills.

One group of preservice teachers was tutoring primary students with learning problems. They made the Flat Stanley Project into a literacy experience and a service learning project. We all donated a couple dollars and sent copies of the Flat Stanley books as well as art materials, disposable cameras and mailing supplies so our pen pal classes could exchange letters and pictures. We even found colored markers and pencils which allowed more diversity in colors and shades of skin tones. We included scissors which could be used by students who were left or right handed.

We paired the students in the literacy practicum from our small college town, with a class in an inner city in Charleston, SC and on an Indian Reservation in Montana. The project was a great success.

Inclusion is a way of life. And it includes Wheelchair Becky, Flat Stanley and yes, even Perfect Barbie. 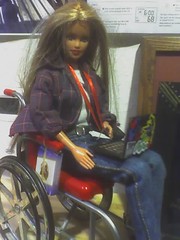 Comments: What are the lessons of Barbie and Friends vs. Flat Stanley? What could have been different? Can we use toys for social change?

Becky looks like she is going to do some social networking on her laptop. What do you think she would write? What about Flat Stanley and Flat Mr. and Mrs. Claus? And what recommendations do you have for Barbie and other toy manufacturers? Are there some lessons for the holidays? Tell us what you are thinking?