Caregivers |Blame it on the Hose 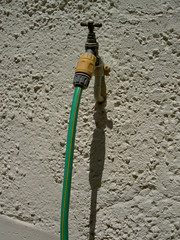 In “Dear Caregivers” Part 1, I talked about the critical role and some of the issues of the caregiver or direct care staff. Today in Part 2, I’d like to share a story of what happened last Thanksgiving weekend. Holidays stress everyone–the people with disabilities, the parents, the staff and the system.

We usually take Aaron home to our house for the holidays so we picked up Aaron on Wednesday. Our regular staff person happily began her vacation and we were going to return Aaron on Sunday evening.

We had a nice Thanksgiving with Grandma and the family. All is right with the world, right?

Blame it on the Hose

On the Saturday after Thanksgiving, Cincinnati was due for its first winter freeze. Tom remembered the outside garden hose was still hooked up at Aaron’s house. Since we take care of all the flowers, mulching and gardening at the house, Tom was worried the hose would expand, break, and cause damage to the plumbing inside the house. We treat Aaron’s house the same as we treat our own, so we drove to Aaron’s house to take care of the hose.

When we arrived, we were shocked that all the lights were on in the house. We knocked, but when there was no answer, we used our key and yelled our “hello.” The TV was on, there were newspapers scattered all over the living room, there was an open purse sitting on the chair, but no one was home.

Our first reaction was to check the house for bodies, worrying someone was hurt and therefore couldn’t answer the door.

Next, we wondered if someone broke into the house and ran out the back door when we pulled up.

Several years ago, the residential company brought homeless people into Aaron’s house when they knew Aaron and Jack were away for the weekend, (another post sometime) so we considered that possibility.

We debated calling the police but decided to first call the residential supervisor.

“What is your problem?”

She told us Jack and the sub staff person must have decided to go out (without her purse, I might add).

The supervisor assured us her company would NEVER just bring strangers into a home (she’s only been with the company for a year so legitimately, she might not have heard the homeless story). She told us they always have plenty of staff to cover holidays and basically made it clear we were bothering her when there was NO PROBLEM.

She also told us that even when Aaron and Jack go to their parent’s homes every weekend, there is still staff covering the house—which we knew for a fact wasn’t the truth.

We fixed the hose. We left the lights, TV and mess. But once again, we cursed the residential company we are forced to live with. Once again they lost our trust.

We brought Aaron back with us, hugged him and gave him extra attention all weekend. We seriously considered just keeping him with us, but there are thousands of people on the waiting list for the Medicaid Waiver. So, if we gave up Aaron’s Waiver, it could be years until he got another one and we aren’t going to live forever. So giving up Aaron’s residential “slot” would only be a short-term fix to a long-term problem.

“I didn’t want to hurt your feelings.”

The next week we found out no one wanted to hurt our feelings and tell us no staff person wanted to work with Aaron. Apparently, they could find a sub staff person for Jack, but not Aaron. No one thought we would find out, and they thought they were sparing us emotional pain.

It was hard to be angry with anyone. Unlike the supervisor, we had a long history of trust with some of our caregivers. We know they love Aaron and give him extra attention and support. They are the ones who bathe, dress and feed him. They clean up his messes and work with us when we take our vacation. They were genuinely trying to protect us from the feelings of rejection they knew we would feel. But the miscommunication and chaos theory that geared its ugly head, made things worse. After all, Jack and Aaron were okay.

We told them to just tell us the truth next time—even if you know it will hurt our feelings.

There were also other messes that needed to be cleaned up from leaving the house in the hands of subs for the holiday.

When the staff person checked the mailbox her first day back, she saw a note from the mailman declaring the house “Vacant—no further mail delivery.”

Stay tuned for Part 3 of our continuing soap opera… Caregivers| “It’s NOT my job.”