Looking for the Village WiseWoman

When I get depressed, I like to pull out a Nora Robert’s book. Don’t laugh:)

For a couple hours, I let the queen of romance weave a tale about another world where, no matter how impossible the conflict, the heroes and heroines will overcome all odds and there will be a happy ending. If only real life was like that. Sigh.

In Nora’s book, “Once Upon A Rose” the village WiseWoman conjures up a “forgetting spell” which protects a baby girl by making her invisible except to those who will wish her “good will”.

Of course any time magic is used, there needs to be a sacrifice to restore balance to the universe–so in this story the mother dies so the baby can live. Of Course.

In my last post, I talked about Balancing my child’s needs and mine. (Click here)so I’ve been thinking about balance, sacrifice and love.

I always felt “Inclusion” and blending into the normal life of a neighborhood is Aaron’s greatest safety–just as animals are protected by camouflaging themselves into their environment. 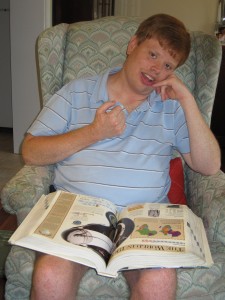 Last week early one morning, the van driver from Aaron’s day program and his residential caregiver were having words in the driveway of Aaron’s house. GEESH! After all the community building I try to do with the neighbors GEESH ALMIGHTY–the normal adults (the paid professionals who are caregivers) are practically coming to blows in the driveway. And who do they call to fix it? NOT the two different agencies who are making thousands of dollars on Aaron, no of course not–they call me.

So, I handled it! YEA ME! It took several phone calls and a couple hours work, but starting next week a new van service will be providing transportation. Hopefully it is a win-win situation. Most of all, Aaron won’t have to have an emotional stressful start to his day. And any neighbors who might have noticed the commotion will forget about it and Aaron will go back to being invisible. He will just be a normal guy being picked up. No one will notice or be concerned. If there is ever a situation where Aaron is in trouble, I’m hoping the “forgetting spell” will bring out those who wish Aaron “good will” and they will speak up and protect him.

Because I was unhappy with some of the things in Aaron’s life and took action, the agency which supports Aaron in his day and residential program have been very upset with me. I was the Wicked Witch, the Mother from Hell, the woman who just kept making trouble, anything but the “WiseWoman.”

Well, about 8:30 this morning, I get a call from the supervisor who previously would hardly even talk to me. He called and said our loving staff person who has been with us for over 8 years had a family emergency. Could I possibly go to Aaron’s house?

In twenty minutes I relieved the staff person and held down the fort until the supervisor could get there. In that time, I took both the guys to the bathroom, plunged the stopped-up toilet, and threw a load of clothes into the dryer. I got the guy’s back-packs and lunch boxes ready and when the supervisor arrived was able to give him directions to Aaron’s program and help them into his car.

I felt really good I could help our staff person, Aaron, his housemate and the company. I also felt good that they called me. It was the “community” the “team” the “extended family” I was always talking about.

What struck me was how the attitude of the supervisor had changed. Of course I can’t speak for him, but I think this was a transformational moment in the way he looked at my role as a mother and as part of the larger ecological support system (see related post).

At one point I almost thought he was going to give me a hug. This was incredible because only a couple days ago, I would have put money on the fact he was purposely trying to “punish” me for challenging his agency and his authority, adding roadblocks to our already difficult and complicated life.

I wish I could craft a romance writer’s tool and create a nice story arc which would tie up this story in a nice circle. There was an opening conflict, it was resolved, and both parties were changed. But “happy ever afters” are just in fairy tales and romance novels.

And that is just normal life. It is true of every person’s life, not just people with disabilities and their families. The morning after… always opens a new chapter.

So just having a happy ending for one day is okay.

Our staff person’s family crisis worked out okay. She called and thanked me for being someone she could count on. Which is perfect, we need each other. But the big change is that I don’t think the supervisor will ever again see me as the “Wicked Witch” or “Mother from Hell”.

But today we didn’t need bigger-than-life heroes and heroines who did heroic deeds, we just needed WiseWomen and WiseMen.

And maybe today, I’ve had my own transformational experience. Maybe when I am looking for the village WiseWoman to create magic, I’ve learned that WiseWoman must be me.

Today felt like it had a “satisfying ending” even Nora Roberts would approve. And maybe more days with just plain old “satisfying endings” will lead to that elusive “happy-ever-after” for Aaron and all people with disabilities.

Are you becoming a WiseWoman or WiseMan?

Tell us your story or experience with forgetting, and happy endings.

If you liked this story, sign up in the “Get My Newsletter” box (top left). Also, I would appreciate it if you would use the buttons below to Tweet, send to Facebook or whatever your favorite social media. Thanks for being part of our growing community.

Climbing a Mountain is a Team Effort, each person is important.