Going to the family reunion, or not? 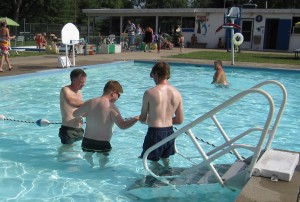 Absolutely gorgeous day for a family reunion at the swim club, the mid-80s, no clouds, not even any bugs to speak of. This is my third post about Going to the family reunion, or not? In post one (click here) I talked about planning and doing an evaluation of what my son Aaron, who has the label of autism, would need in terms of modifications and accommodations to feel welcome and included. In part two, (click here) I wrote about the layers of social systems that are part of each family. Today in part 3, I’m going to talk about the actual activities and events that happened.

Tommy (Aaron’s brother), Ana, Baby Isabella and Ana’s parents from Brazil arrived about the same time we were unloading the coolers, so they helped me carry the stuff and guide Aaron through the parking lot. My husband, Tom had to work so he had to miss this year. If Tommy’s family wasn’t here to help, Aaron and I wouldn’t have gone. I figure there were about 60 relatives ranging from my mom age 88 to Baby Isabella, one year.

Aaron started repeating his, “You Okay?” routine and everyone came over and gave him a high 5, patted him on the back, or laughed and said, “Yes, Aaron we’re okay.” They were welcoming Aaron on his own terms. Sometimes Aaron looked at them; sometimes he didn’t. He said, “You okay?” about one time every other second. So that’s a lot of “You okays.” Everyone just took it in stride and went back to what they were doing.

Setting up the routine

In past family reunions, everyone swam and then ate about 6 pm. So we arrived at about 4 PM to find everyone eating. Oops.

Even though we split an Arby’s sandwich on the way to the swim club, if everyone else is eating, you can bet Aaron is going to want to get a plate ASAP. I introduced Ana’s family the best I could, but getting Aaron settled and fitting in the social setting was priority one.

Almost immediately, Aunt Ann started putting melon balls on Aaron’s plate. Some male relative who I didn’t even know had the brats and metts ready to go, so with a little help, Aaron was happy as an ant at a picnic—aarhh. How Aaron melded into the group in the first ten minutes makes all the difference.

While Aaron was busy eating, the rest of the family settled in, made introductions and even though Ana’s parents’ first language is Portuguese, everyone was excited that they were here for a visit. Various Aunts, Uncles, Cousins, second cousins and relatives I swear I’ve never seen before, were all very gracious. Ana’s parents are just naturally friendly and their English is incredible. (They learned it by watching American movies and taking English classes in high school.)

As soon as Aaron finished eating, Aunt Ann cleaned up Aaron’s spot. Uncle Steve and Tommy offered to take Aaron swimming. I didn’t even have to ask. They helped him put on sunscreen, take a quick trip to the bathroom and then just whisked him off (of course Aaron doesn’t really whisk anywhere).

Terri, my cousin who organized the whole event, told us that the neighborhood swim club was just given a ramp by the Jewish Community Center when they built a new facility. (Note to self: next year do not take off Aaron’s shoes until he gets to the ramp—the sidewalk was too hot and he had trouble walking to the ramp.)

Aaron, Tommy, and Uncle Steve went in the big pool. Ana, her parents, and the baby went to the baby pool. I took pictures and held my breath. Aaron had a couple of tough moments, but he calmed himself by biting his hand and then was fine.

I got to talk with a couple of people, and watched everyone playing in the water. Aaron can swim pretty well. He does this sort of dolphin movement and though he doesn’t close his mouth he can swim from one side of the pool to the other. The lifeguard watched Aaron and his team the first couple minutes and then when everything looked in control, he relaxed and just concentrated on the entire pool as usual. After about half an hour, other relatives and Ana’s parents joined everyone in the big pool. Baby Isabella had a great time meeting new cousins and playmates. The toys went in and out of the pool, the kids stood up, fell down—all was well with the world, just a sunny day in paradise. 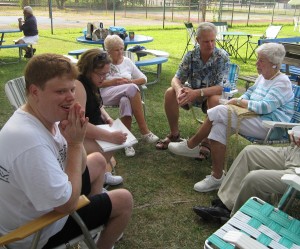 The Circles of Life

Everyone caught up on the recent engagements, school arrangements, camping trip, new babies… all the gossip and family changes. Ana made a Flan dessert which was a big hit. Someone brought about five of those blue ice containers and put them together like a cold plate—instead of a hot plate—and I thought that was very clever. Everyone ate, traded stories, pictures, and just had a great time.

Uncle Ed’s memorial dinner was the next day, but my cousin Dan, who is a Bishop, came and ask about how Aaron was doing. How was Tom doing? (When someone in the family isn’t there, they are missed.) We got to tell the story of how Tommy surprised us by moving back to Cincinnati last year… it was just normal, everyday family talk.

Because of people helping out with Aaron, it was an enjoyable day. We left after 4 hours, just long enough.

Worth the price of admission:

My favorite moment: One of the dads was holding his two-year-old baby in his lap. The baby had an angelic face and a devilish grin. They were relaxing after a swim when the baby suddenly reached up and grabbed the hair under his dad’s arm. OUCH! His dad—I mean you could hear him gasp and see his eyes tear up-couldn’t reach his son’s hands. Every time he tried to lower his arm, the hair was pulled tighter. We were all laughing so hard everyone’s body was shaking up and down in their seats. Grandma looked like she would need oxygen. The more dad tried to pull the baby’s fist away, the tighter he squeezed.

I thought the lifeguard was going to blow the whistle from all the hoots and hollers. It was a memorable moment that will become an urban legend in our family as the repetitions help the story grow. (Remember, Mark Twain, said to never let the truth get in the way of a great story.)

Summary:
All our planning worked. Aaron and all of us had a great time. He belonged. We all had a chance to reconnect to all these people who are connected by blood but now are also connected by new memories.

Moral of the story: shave your armpits before going to family reunions:)

Did you ever think of all the modifications and accommodations we just naturally make for babies, seniors, people with disabilities? Baby bottles need to be kept cold and then heated, Grandma likes soft foods, Uncle Charlie always likes a ball game on a radio or TV– we make these kinds of modifications all the time just because we want to make the people we love happy and comfortable.

And what about us regular folk, we also use modifications and adapt environments and “things” all the time. We bring our lawn chairs, sunscreen, ball gloves to protect our hands… we like our hotdogs with… spicy mustard, or ketchup, or sauerkraut or well done or on buns, or not …?

We don’t think of these small ordinary “things” as adapting a hot dog? Because we are all normal, yet it is what we are doing.

But putting in a ramp or curb cuts–well, even if we normal folks use it, it is er, handicapped or special or an ADA adaptation.

When builders use the principles of “universal design” and blend the adaptations into the everyday way we access buildings or swim pools… then parents won’t have to think of ecological assessments before they go to a family reunion, everything will already be in place.

ADA is good for all of us. i.e. Now most grocery stores have accessible entrances. Grocery carts and children’s strollers and people in wheelchairs can just go through the front door. And, since it is now so common, no one even notices that the entrances have changed. They meet “universal design” for EVERYONE.

The world is becoming more accessible and just in time. Because me and all my relatives are getting older and like it or not, we will soon join the ranks of the “disabled” and our life activities will depend on all those loving people around us, and those universal designed environments.

Tell us in the Comments

What are some of the things you do to make your family reunions more inclusive? What do you think of Universal Design? Is ADA just another government example of “Big Brother” and forced rules and regulations?

Keep Climbing: ONward and Upward
All my best,
Mary