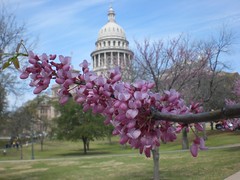 Each week the Arc (formerly, the Association for Retarded Citizens) reports on what is happening in Washington, DC. The Arc monitors the public policy and legistlative process so that it may advocate for people with disabilities and their families. UCP (United Cerebral Palsy), TASH (formerly, The Association for Persons with Severe Handicaps), and several other national organizations all work together to advocate for our children.

Here is the Arc report for this week: notice the depth of the issues. Also notice most of the news is NOT GOOD for us. Each week there is another detailed report. I am thankful these organizations keep up–that is worth my dues.

This is a difficult time to give our children with autism and other severe disabilities the day-to-day care they need PLUS worry the sky is falling on the support we depend on.

Unless you are independently wealthy, it is a humbling experience for parents to be at the mercy of the system. We need to keep informed and do what we can.

Kansas Governor Sam Brownback has written HHS Secretary Sebelius requesting a waiver of the Medicaid maintenance of effort (MOE) requirements and a full Medicaid block grant. The MOE requirements are in place to make sure that states do not drop people from eligibility before the Medicaid Expansion takes place in 2014. Many Republican Governors have asked for the flexibility of a block grant so that they can cut the Medicaid program and not comply with the regulations.

On March 9, the DPC’s Marty Ford testified before the Senate Appropriations Subcommittee on Labor, Health and Human Services, Education and Related Agencies in her capacity as Co-Chair of the Social Security Task Force of the Consortium for Citizens with Disabilities (CCD). She testified on the Fiscal Year 2012 budget request for the Social Security Administration (SSA) and the impact of possible cuts to the Fiscal Year 2011 budget on the agency’s administrative resources with which to process claims for people with disabilities and seniors. In describing the impact of the House-passed continuing resolution (CR) for the remainder of FY 2011, she stated, “If SSA is forced to furlough employees to address the full $430 million shortfall from the current CR spending level, it will result in nearly a month of furloughs, having devastating effects on service to the American public. In one month of furloughs, SSA would complete 400,000 fewer retirement, survivor, and Medicare claims; 290,000 fewer initial disability claims (with processing time increasing by a month); 70,000 fewer hearings; and 32,000 fewer continuing disability reviews. In addition, H.R. 1 severely cuts funds for vital information technology (IT) improvements and funds to build the critical new National Computer Center, which must be built to protect Social Security electronic information and infrastructure.” Read her full testimony at:
http://appropriations.senate.gov/ht-labor.cfm?method=hearings.download&id=f7b3c5f6-ec78-4299-bf55-af8e7ee780d7

Employment – The Arc submits testimony for the record for Senate hearing on employment of persons with intellectual disabilities
On Wednesday, March 2, the full Health, Education, Labor, and Pensions (HELP) Committee held a hearing, entitled, “Improving Employment Opportunities for People with Intellectual Disabilities.” Lynnae Ruttledge, Commissioner of the Rehabilitative Services Administration, and Sharon Lewis, Commissioner of the Administration on Developmental Disabilities (ADD), testified along with a panel consisting of a state employment agency director, a private employer, a self advocate, and a researcher. The hearing focused on the barriers to employment faced by individuals with intellectual disabilities and offered criteria for and examples of integrated, competitive employment. All panelists strongly supported “employment first” principles. Read The Arc’s statement at: http://www.thearc.org/document.doc?id=2983
Read the hearing testimony and watch the proceedings at:
http://help.senate.gov/hearings/hearing/?id=536891af-5056-9502-5d9c-9a3e588e3214

The Department of Health and Human Services (HHS) and the Treasury Department released rules Thursday outlining how states could apply for Section 1332 waivers. These waivers would allow states to opt out of key health reform provisions like the exchanges and individual mandate if they meet certain benchmarks for affordability and coverage. In current law the waivers begin in 2017. However the Obama Administration is supporting moving the timeline up to 2014. Senator Wyden (D-OR) introduced a bill in the previous Congress to make the change.

The U.S. Department of Justice reached an agreement with the Hillsboro School District in Oregon so that a student with autism may bring his trained dog into the classroom for a trial period. The student’s parents had been trying to get the district to allow the dog to accompany the child for three years. The dog distracts the student when he is about to engage in behavior that could be dangerous. To read the press release about this case, see:
http://www.justice.gov/opa/pr/2011/March/11-crt-285.html

As soon as Tuesday, the House is expected to vote on a three-week Continuing Resolution (CR) that would cut more than $6 billion from current discretionary spending levels. The Senate is expected to vote later in the week. This latest CR will keep the government running through April 8 after the existing two-week CR expires on March 18th. This would be the sixth continuing resolution since the start of the current fiscal year on October 1. House conservatives are urging their leadership to make deeper cuts and defund the health care law as part of the CR. Negotiations continue between the Administration, House, and Senate leadership on completion of the FY 2011 appropriations.

The Health Subcommittee (R-PA) of the House Energy and Commerce Committee will hold a hearing titled “The Implementation and Sustainability of the New, Government-Administered Community Living Assistance Services and Supports (CLASS) Program.” The Arc and UCP strongly supported passage of the CLASS program as part of the Affordable Care Act. For more information on the hearing see:
http://energycommerce.house.gov/hearings/hearingdetail.aspx?NewsID=8332
For more information on the CLASS program see:
Http://www.advanceclass.org

A front page story on Sunday, March 13, entitled “At State-Run Homes, Abuse and Impunity” exposes significant abuses by direct care workers. It specifically highlights the difficulty in terminating direct care staff with documented cases of abuse and neglect due to the state’s public employee union rules. Read the article at:
http://www.nytimes.com/2011/03/13/nyregion/13homes.html?_r=1&scp=2&sq=disabled&st=cse Readers are encouraged to add their comments to those already posted at:
http://community.nytimes.com/comments/www.nytimes.com/2011/03/13/nyregion/13homes.html?sort=oldest

Please note that you can view previous issues of the Capitol Insider, at thearc.org anytime by choosing “Capitol Insider” under “Public Policy.”

If you have any questions, feel free to contact me at:
mailto:[email protected]

What issues do you care about? Is there anything here you will click on a link and learn more about? Do you think it is important to keep up on the national issues?