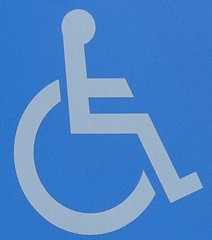 The Americans with Disabilities Act (ADA) was passed July 26, 1990. This is an update from the 20th anniversary post.

First Hand Discrimination is a Shock

Around 1985 our family was on a thousand mile camping trip to visit my sister in Phoenix, AZ. Aaron was about 10 years old, Tommy 8. That morning we packed up our tent and stopped about 10 AM in a Big Boy type restaurant in Flagstaff. We purposely chose a later time to miss the rush. We had eaten at similar restaurants each day of our trip.

We were sitting in a corner booth watching cars go by. Aaron was acting great, just eating his eggs and pancakes.

When the manager came up to the table we just smiled and expected him to ask if everything was okay. Instead, we got the shock of our lives. We were being asked, no told, we had to leave that minute. He would escort us out (after we paid our bill.) Couldn’t even finish our orange juice.

It seems someone complained they didn’t like the way Aaron looked. Not that Aaron was having a tantrum, or throwing things or … just didn’t like the way he looked. When I asked to be able to speak to that person we were told “NO, now get out. We don’t want your kind in our restaurant.” Me, being the great advocate I am, I just burst into tears, grabbed Aaron and ran to our car.

25 years later, I can still feel the pain and stigma of that experience as if I were living it right this minute. It was a transformational experience because it beat the fact in my head that we were not a normal family. Today that would not happen and the difference is ADA.

July 26, 2010 marks the 20th Anniversary of ADA: The Americans with Disabilities Act. The Declaration of Independence may have taken place in 1776 for white male property owners, the civil rights of women and people of color happened in the 1960s, but many people with disabilities, their families and friends think of the 1990 ADA as our civil rights act. 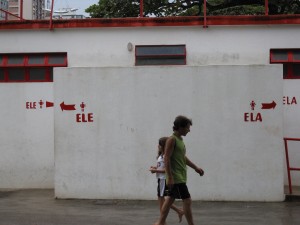 The international symbols were a welcome relief.

Here are outside facilities in Santos, Brazil. The international symbols saved the day.

Accessibility is for everyone

There has been tremendous progress in the last 20 years to change attitudes, fight discrimination and give people some opportunities in jobs, education, technology, and communications… a whole lot more than just curb cuts and handicapped parking places. But there is so much more to do.

In a later post, I will talk more about accessible websites. I’m trying to find more information on the official “Bobby Approved” (think English Bobby–police officer) which rates websites for being friendly to people with disabilities. There is a little blue police icon in the corner of many websites–well, maybe not many–but at least some.

If you have a couple minutes check out the official website of ADA.
http://www.ada.gov/ Information and Technical Assistance for the Americans with Disabilities Act/a>

This video documents the speech given by President George H. W. Bush when he signed the Americans with Disabilities Act (ADA) into law on July 26, 1990. In the video, President Bush speaks to a huge audience of activists, Congressional supporters, people with disabilities, and their families and friends gathered on the south lawn of the White House.

The 22-minute film, provided to the Department by the George Bush Presidential Library, is being re-released on the Internet to increase awareness of the ADA.

Synopsis of My Country

In this one-hour documentary, symphony conductor James DePreist, who contracted polio as a young man, profiles three people with disabilities whose lives have been shaped by the struggle for equal rights. Mr. DePreist is the nephew of African American contralto Marian Anderson, who in 1939 was prevented from singing at Constitution Hall. He draws parallels between racial barriers and the barriers faced by people with disabilities.

Our friends at the MN Governor’s DD Planning Council have this awesome resource on the timeline of ADA. http://www.mnddc.org/news/newsitems/ada_20th_anniversary_timeline.htm

Ohio Legal Rights released this press release about the 21st anniversary of ADA.

We still have much to do and with the budget cutbacks threatening basic services for people with disabilities, this is a time of great stress.

Do you have any stories to share in the comments? I know many people think the government is too large and there are too many laws. What are your experiences with ADA? What do you think is the role that government should play to protect the civil rights of vulnerable people?