Home: more than a place 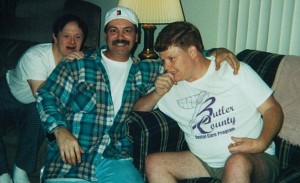 Here is a picture of Aaron (on right) his housemate Jack (left) and one of their caregivers (center).

The house is a little ranch in a quiet neighborhood. Aaron and Jack each have their own room which is decorated with their favorite things. We remodeled the back half of the garage into a room where the staff could sleep and maintain an office. Aaron and Jack need a staff person with them at all times. I’ll talk more about the staff in another post.

The guys have a HUD rent subsidy so they only have to pay one third of their income in rent. The house is owned by a non-profit agency that does the maintenance. Thanks to Aaron’s Uncle Steve, we learned about HUD and were the first people in Ohio to access this source of funds. Some day I’ll tell you all the details about the craziness of applying, it involved five people using speed-dial and having to call between 10:00 AM and 10:30 on a specific day to secure the limited vouchers. It was a group effort, and when we got the application we felt like we had won the lottery. It takes parents and other caregivers a lot of effort to keep all the funding balls in the air, but with some creativity it can work.

Aaron and Jack have lived together for over 11 years. Jack has Down syndrome and is in his 50s and Aaron is 35 and has the label of autism. They get along great. They just seem to know what the other person wants or needs. Jack will pick up stuff if Aaron drops it, and Aaron just seems to know when Jack wants to be alone with his videos. It is pretty remarkable that even without verbal language, they just seem to have an understanding, their own system of communication. They don’t go in each other’s rooms–even if the door is open. They know their own chair and place at the kitchen table and they each have a job around the house. Jack loves to choose and pass out different seasonal placemats (this week’s have watermelons). Aaron’s job is to clear the coffee table in the living room and water the plants.

Aaron’s favorite things to do are to listen to music, go swimming, go anywhere–he likes cars, buses, trains, planes… if it moves, Aaron likes it. We bring Aaron to our house every weekend so we can be a part of his life, and to give the staff a break.

When Aaron and Jack were first moving into the house, there was a huge lawsuit and neighbors across town were claiming that having people with disabilities would lower property values. Fortunately, Aaron and Jack’s neighbors have been wonderful. We planned a picnic last year for all of the people in Aaron’s day program and the family next door not only came to the party, they brought the potato salad and joined in the games. They have helped clear snow and would help in any emergency. We’ve watched the kids next door grow up and feel blessed to have them in our lives.

In November it will be two years ago since Aaron moved into a new home so he could live closer to my husband and myself. Aaron got a new residential company and new staff.

Jack stayed and got a new roommate though he did come to visit. When the residential company went bankrupt, his loving staff stayed with him for a while, but then moved on. The company that owned the house decided to sell it. So, Jack lost Aaron, his staff, his house and his security. Is it any surprise Jack’s health has suffered.

Next week, Aaron is going to try and visit Jack. There will always be a place for Jack in our hearts. He is a quiet, gentle man. There is no doubt, he and Aaron shared an important part of their lives. There is no doubt they loved each other and looked out for each other–just like a family.

Currently we are looking for a new roommate for Aaron. Jack lives in another county now, so he can’t join us. We meet a new man next week. Will he be someone who will be friends with Aaron. Can this new person be like Jack.