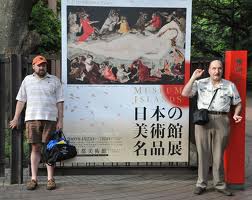 Tracy and Larry in Japan

Wretches & Jabberers Is A Nationwide Hit!

Wretches and Jabberers is a movie about Tracy Thresher and Larry Bissonnette, two men with autism, as they embark on a global quest to change attitudes about disability and intelligence while promoting the importance of presuming competence.

GREATER CINCINNATI April 16.
Wretches and Jabberers will begin at noon on Saturday April 16th at the Newport on the Levy AMC Theatre. To buy tickets for Saturday’s show or other cities click here.

If you can’t attend the movie, perhaps you can still support Autism Awareness Month and The Autism Society.Click here to BUY THE SOUNDTRACK ON ITUNES I have also heard the Soundtrack is available at Barnes and Noble Stores.

“I’ve spent a lifetime trying to get in touch”

Check out what people have been saying about Wretches & Jabberers:

Gerardine Wurzburg’s Wretches & Jabberers may be the best film you’ll see on a subject you probably want to avoid — although you’d be wrong about that. Yes, it’s a documentary about autism but it’s also nearly perfect in doing what an advocacy doc should do: show rather than tell, entertain rather than preach. If this is your first exposure to the world of autism, it will be an eye opener. Kirk Honeycutt, Hollywood Reporter

When Tracy Thresher has something to say, he uses his right index finger – and a special computer that gives voice to what he types. Hunched over the device, he begins. Tap, tap, tap. Tap, tap, tap. Tap, tap, tap, tap…. Autism silences the 43-year-old Vermont man. He doesn’t speak. But he has a message for the world about how people should think of people like him. So he taps it out.”To think intelligence, even if you see wacky, goofy behavior. We are simply intelligence, shown in a different way,” comes the robotic voice, broadcast out of his computer… John Curran, Associated Press

The new documentary Wretches & Jabberers follows the journey of two autistic men—Larry Bissonnette, 52, an artist; Tracy Thresher, 42, an advocate—as they travel the world, attempt to banish the myths about autism, and reveal its global face. PARADE spoke to the pair behind the film—Academy-Award-winning director/producer Gerry Wurzburg and co-producer Douglas Biklen, Dean of the School of Education at Syracuse University. Joanne Chen, Parade Magazine

Wretches and Jabberers is a buddy movie, a road trip movie and a moving adventure. But this new film is different than your typical mainstream fare. The documentary stars two autistic friends and advocates who do most of their communicating through typing. The story follows Larry Bissonnette and Tracy Thresher, as well as their assistants Pascal Cheng and Harvey Lavoy, as they travel around the world, meet other autistic people, and advocate for autism rights. John Hockenberry “The Take Away Radio Show.”

And Larry’s Blog with more of his thoughts and stories.

I can’t wait to take Aaron to see the movie this Saturday. As an added bonus, the new Director of the Day Program for Goodwill/Easter Seals is going to go with us. I have to say, this is the first time since Aaron graduated from High School that I am hopeful Aaron will begin to communicate again with facilitated communication (FC).

I am reminded of the quote from the early days of FC:

“Not being able to speak, is not the same as not having anything to say.”

But I’m preparing myself.

Aaron has not used his communication system in over 10 years. Ever since his facilitator moved away and …. long story.

I have been so moved by Larry and Tracy, my faith in Doug Biklen, the W&J trailer, the songs from the Soundtrack and the pre-publication publicity.

Sometimes a movie, a song, a story about hope and a lifetime of endurance is so moving it can take your words away: “Being able to speak, doesn’t mean you will find the right words.” Yep, I’m one of the Jabberers.

Parts of this were quoted from the Wretches and Jabberers Newsletter: Volume 8 (April 2011)

Please add your voice to this story:

What phrase in the song, The Letter, did you find the most powerful? Will you see the movie, buy the Soundtrack, or otherwise support Autism Awareness month? Can you imagine what not being able to speak with words must be like? Anything else you want to add?