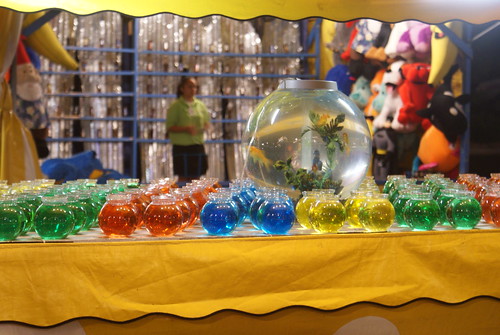 Last year at our PTA school carnival, my son Tommy, after numerous tries, threw the ping pong ball in the little glass bowl and won a goldfish. He was thrilled. I was busy working at the Magic Show and was hardly enthusiastic about his new transparent fish in the baggie.

Tommy named the fish “Red and Gold” after the red spot on his back. He wanted to immediately buy a 100 gallon tank, fish food, colored rocks, etc…. We compromised on an old glass and the promise that “if it lived” we would get the needed supplies. As we went to bed we talked about how our friend Billy’s carnival goldfish didn’t survive the first night. We talked about how it would be sad if his fish died, but we would flush it down the toilet. We talked about a friend’s dog that had died and how there was a life and death cycle and only the strongest would survive.

At 5:00 AM a jubilant Tommy raced in with “Red and Gold” still swimming in the glass. Being a tired (it was 5:00AM) and realistic mother I said, “That’s good so far, but don’t get your hopes up.” We fed the fish stale bread for a couple of days because I didn’t’ want to waste $3.00 on fish food. Every day after school, Tommy would race in to check on his “Red.”

Philosophically I had always felt it was more important to put our energy into helping people. I found it difficult to accept that some pets are treated better than people. I had zero expectations this fish could be healthy. Zero expectations its very existence could be meaningful to Tommy. Zero expectations, except that if it did survive it would be just one more responsibility for me. I really just wanted the fish to die, get it over with.

This same week, we had an appointment with the orthopedist for my son Aaron. Aaron has the labels of autism and intellectual disability; some doctors have also said Cerebral Palsy and extremely flat feet.
The orthopedist walked in the examination office with several interns on his heels. Without even acknowledging the fact that Tommy, Aaron, my husband and I were in the room he spoke into a tape recorder while the interns were taking notes. “Here is a white male, appears to be about 10, with a (something or other jargon…surgery on his ….” He continued for another 3-4 minutes, poking Aaron in different parts of his foot, legs and hips to test this or that reflex.…. He never gave eye contact to Aaron or any of us.

At this point, my husband walked over to the Doctor, extended his hand and said, “Hello, I don’t believe we’ve met.” This took the Doctor off guard and he turned off the tape recorder. In the give and take of the next few minutes we explained our concern for Aaron’s gait and balance. We demonstrated the exercises our physical therapist recommended. Did he say Aaron needed surgery? Did Aaron need a new prescription for his shoe inserts?

Instead of answering our questions the Doctor turned and asked me, “Is he happy?”

“Is Aaron happy?” I repeated, not quite sure what the Doctor was asking. I fumbled out an answer of how we try to make Aaron happy. Then the Doctor said, “It would be very difficult to get Aaron to understand surgery, orthopedic appliances, etc., so let’s not upset the apple cart and do anything to his feet that would make him unhappy.”

My friend Susan, also “severely challenged” went to the dentist. At 13 she still had her baby teeth. Her mother was very concerned because her permanent teeth were crowding her mouth but the baby teeth weren’t falling out. The dentist brushed off the concern. “Why bother, she’s retarded, just let her have two rows of teeth. She’s not going to ever be prom queen.”

We actually know a man with Down syndrome whose parents were told their son would die before he was 6 years old. When he was 10 and his baby teeth still didn’t fall out, the dentist told the parents it was not worth putting the boy through the discomfort of getting his teeth pulled because he wouldn’t live very long. Well, the man is not 56. He still has the two layers of teeth. His baby teeth were never pulled. And now, he has impacted teeth which give him much pain and he has to have all his food cut into tiny pieces or pureed.

I wish these were isolated stories.

When I worked at the Parent Center, every day we would hear of people with disabilities being denied communication devices, tubes in their ears, surgery for tight leg muscles…because there were no expectations, no intrinsic worth or value to their lives.

At Tommy’s persistence, we eventually bought a real fish bowl and real fish food. Even though “Red” is totally dependent on Tommy, I’ve watched Tommy feed him and change his water, proudly introduce “Red” to his friends and alternate dropping his GI Joe men into the fish bowl to give Red some variety in his life.
An animal that can’t walk, talk, jump or play–“Red” had given much to Tommy. In spite of my initial prejudice and negative attitude, “Red” has become a valued part of our family.

It embarrasses me to think I made “Red” prove his worth before I would meet his basic needs of more space and real food. Nothing was wrong with the fish. I was the one with the problem.

This year’s Carnival was yesterday. Tommy sang Happy Birthday to “Red,” and guess what? Tommy spent his first ticket winning a playmate for “Red.”

Anyone else want to share an embarrassing story about low expectations, surprises? Have any of you had similar experiences with anyone in the medical professions? Schools? Community?

All the Best,
Mary

Day 17 of our Chris Brogan’s Every-Day-For-30-Days Blogging Challenge Follow us on Twitter #CB30BC
Alison Golden of The Secret Life of a Warrior Woman is my partner in this challenge: (click here to check out her new post.)