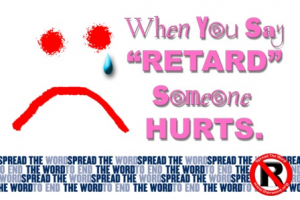 Poster made by HS students

Sept. 22, 2010 The US House of Representatives has unanimously approved a bill to replace the term “mental retardation” and “mentally retarded” with “intellectual disability” and “individual with an intellectual disability.” The Senate previously passed this bill. President Obama signed the legislation into law.

This is a triumph for all of us, but especially for people with disabilities, their parents and families who have carried the burden of the word retarded.

Below is one of the press releases/alerts I received from the group of parents of children with disabilities and advocates Our Children Left Behind and The Autism National Committee.

Tomorrow I want to talk about the role of parents and advocates in making a difference in our world and getting legislation passed. Rosa’s bill is named after a young woman with Down syndrome, you can bet her mom was involved.

But today I just wanted to show what a great press release and call to action looks like. So no need for phone calls–the bill is passed.

What are the components of this press release that would make you want to take action? no action?

Just for transparency, I support this bill and have been a member of Aut-Com and followed Our Children Left Behind almost since they began.

Hi, all! This is from Jessica Butler, long time advocate and mom of a child with a disability. Legislation has passed the US Senate (“Rosa’s Law”) that would eliminate the use of the “R” word (“retarded”) with the less loaded term of “intellectual disability.” We believe this change would help eliminate the stigma currently associated with the “R” word, and this law would cost NO money to implement.

If you agree, please make a quick call to your U.S. (federal)
representative (see instructions below), and please share – thanks!

(The Senate has passed this bill but the US House still needs to – if it’s not passed before the end of the legislative term, the process will have to start all over again from the beginning in the next term.)

As the year winds down, we’ve all talked and debated many important policy matters. You’ve heard a lot about restraint/ seclusion/aversives, and you will be hearing more about legislation regarding these dangerous techniques. We’ve all called Congress about recovering expert witness fees, Buckhannon, unlevel playing fields, and woefully inadequate educations that do little to prepare children with disabilities to succeed (much less go to college or earn a living).

But as you sip your morning coffee, tea, or Mountain Dew, I’d like to try to convince you to make one more call to Congress– a short call for human dignity. The Senate has passed Rosa’s law (S.2781), a bill to replace “mental retardation” in our federal laws with “intellectual disability.” Now, it’s time to ask your Representative to do the same.

Maybe this isn’t as big a deal as all the other kinds of legislation. But as WE know, “retarded” is used as a slur, demeaning and denigrating to 6 million adults and children in America. The stereotypes associated with the “R” word connote the slamming door of “can’t” more than the hopefulness of “can” which encourages people to teach children with intellectual disabilities to succeed. Even some of our archaic restraint/seclusion practices are premised on outdated stereotypes that children with intellectual disabilities cannot understand anything else.

Eliminating the “R word” may not cure the stereotypes, but it will help bring society closer to realizing that people with intellectual disabilities are part of all of us. Of course, it’s hard to eliminate it when our core disabilities laws use it. Nearly 1/2 million children with IEPs are categorized as “mentally retarded.”

S.2781, Rosa’s Law, would change all of this. It will replace “mental retardation” and “mentally retarded” with “intellectual disability” in our federal laws. These include the Individuals with Disabilities Education Act, Elementary and Secondary Education Act (the law formerly known as No Child Left Behind), Rehabilitation Act, Public Health Service Act, Health Research and Health Services Amendments and a number of other health and disability laws. S. 2781 will also update federal regulations.

Some people think this bill is silly or wasteful; many of us do not.

It’s about dignity for people with intellectual disabilities.

Rosa’s Law will not impact services, rights or educational opportunities for people with intellectual disabilities. It just replaces one phrase with another; everything else stays the same. It will not cost any money. Federal Regulations and Statute Prints will be updated on the same schedule they always are. The bill will not force states to change their own laws if they do not want to. Rosa’s Law is a bipartisan bill, it was cosponsored by Senators Mike Enzi (R-WY), Richard Burr (R-NC), Barbara Boxer (D-CA), Barbara Mikulski (D-MD), and 40 other Senators from both parties. The Senate passed the bill last month and sent it to the House.

But now the legislative session is winding down. To make S. 2781 a
federal law, the House of Representatives must pass it. If the House does not, we start all over again next year…..from the very beginning.

Everyone should call your own Representative. But it’s particularly
important to call your Representative if he/she is on the House Education and Labor Committee (see _http://edlabor.house.gov/about/members/_ (http://edlabor.house.gov/about/members/) for a list of members) or House Energy and Commerce Committee ((for a list of members, go to _http://bit.ly/dfws6B_ (http://bit.ly/dfws6B) or go to _http://energycommerce.house.gov/_ (http://energycommerce.house.gov/) and click on About and then Members) or in the House leadership. Energy & Commerce handles the federal health laws, which Rosa’s bill will also update. If your Representative is on Energy & Commerce, please ask for the Energy & Commerce aide. Tell this aide this is why the Committee has the bill and ask them to support it. Both committees must approve the bill to send it on to the full House.

Perhaps Rosa’s Law is a small change, but it is one that will say a lot about our national cultural attitude toward people with intellectual disabilities. Updating our federal laws will not eliminate stereotyping or low expectations for children with intellectual disabilities, but it is a step in the right direction. It’s a way to make sure America’s laws stand up for human dignity rather than archaic terms.

I wish you a great week. I hope you’ll join me in taking 5 minutes out to call your Congressional Representative and ask him/her to pass S.2781, Rosa’s Law. It’s a simple bill and an easy call to make. You have all you need above. If you agree with me, make a call and send this message on to 5 friends (or 20 or 50).

It’s a step for Human Dignity.