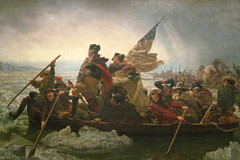 Is Anybody There? Does Anybody Care?

Each of us has transformational moments in our lives.

One of mine was watching the musical 1776. In one scene the night before the vote on independency, John Adams reads a letter from George Washington and using his words, sings about “commitment.”

These founding fathers used words and actions to create a form of government that never existed before. They were visionaries, they were leaders. Seth Godin would say they were Linchpins, they shipped.

Since Aaron was born, in my small way, I have taken a stand for the civil rights of people with severe disabilities.

With ADA they now have a chance at the American Dream of our forefathers. The dream is not a promise, it is still only a dream for most of us, but there is the possibility–the hope.

Dedicated parents and professionals of people with disabilities answered the call: “Is anybody there? Does anybody care? Does anybody see what I see?” Their work and sacrifice have made it possible for Aaron and others to grow up with their parents and families; go to school with their brothers, sisters and neighbors; and learn skills that will help them after they graduate for the 40, 50, 60 years of the rest of their lives.

Thanks to the Americans with Disabilities Act (ADA) they can live in the community of their choice; and with luck have people who will care about them.

In 1975 when we were first learning of Aaron’s intellectual disability, an inclusive life was just the dream of a few parents and professionals. Now, in 2010 we have better attitudes, laws, research and information. We have made tremendous progress, at least for school-age kids. But like other civil rights movements we do not have all the answers, we have not reached the top of the mountain–especially when it comes to the lives of adults with disabilities.

I was interviewed last week by a university student who was taking a class on people with exceptionalities. His assignment was to interview a parent who had lived during the early days of IDEA and compare “inclusion” with the “continuum of services.”

As I prepared for the interview, it felt good to go through my files and pull the documentation of what we have accomplished in the past 30 years.

See (Parallels in Time if you are interested in a history) on the other hand, it was shocking that inclusion is still a controversial issue.

I know old paradigms die hard, but it is more than that.

There are some people who will never give up their segregated and “special” attitudes and values. Some people who will forever fight for keeping the status quo and the charity model. And, it is no secret that No Child Left Behind–left our children behind.

In future blog posts I will talk about this journey, but for now I am just going to say there is a resource page that will have some contact information.

In the comments: What do you think? Is anybody there? Does anybody care?