Smokey the Bear, Aaron, and a joke

Smokey the Bear and Aaron 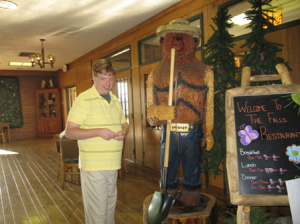 Aaron and Smoky hanging out in community room

This year, Smokey the Bear celebrates his 65th birthday.

Last weekend, as our family was trying to keep our house available to prospective buyers, we took a road-trip to Clifty Falls State Park in Indiana. (click here for related post)

Between the community room and the dining room we caught up with the “Only YOU can prevent forest fires” celebrity in this bigger-than-life woodcarving of Smokey the Bear.

It is hard to know what Aaron knows and doesn’t know, but he went to check out Smokey and it reminded me of one of the most amazing moments in Aaron’s and all of our lives.

Around 1991 Aaron was about 16 years old and Tommy 14. We were driving from Escalante National Monument on one of our famous/infamous summer vacations. Check out America the Beautiful for another of our trips (click here).

We had just fixed breakfast on our trusty Coleman stove, packed up the camper and were traveling on All American Hwy 12 to meet my sister in Moab, Utah. It was ferocious hot.

This area is so remote, it could have its picture next to the word in the dictionary. Think canyons, dust, dirt, and sky. We stopped at the traffic light in this one red-light town of Escalante.

Suddenly, a police car pulls up in front of us and blocks our car. Then, as only can happen in a small town, a full blown parade starts up the street. We thought it was hysterical but figured the kids would enjoy it, so we got out of our car and joined others who were gathering on the sidewalk. 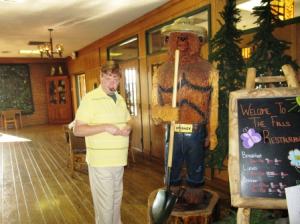 Aaron uses cards to calm himself

The parade certainly wasn’t because we rolled into town, but whatever the occasion the hometown parade had the Boy Scouts, a hay wagon full of kids, fire trucks, the High School Marching Band …. There was even a vehicle from the nearby National Park.

We were watching all the excitement when, low and behold, a six foot Smokey the Bear mascot surprised us. Smokey shakes Tommy’s hand, turns and reaches for Aaron’s hand.

In a voice as clear as the mountain sky, Aaron says, “Who are you?”

Now, we all know Smokey is also non-verbal. But he laughed, gave Aaron a hug and moved on to the other kids.

Tom, Tommy and I were gobsmacked that Aaron had talked. “Who are you?” clear as a bell, I’m talking Big Ben kind of ring.

Now, unless you understand how amazing it was for Aaron to say this sentence, you wouldn’t know why–25 years later–this is still a transformational moment and one of the most significant memories of my life.

Remember, the psychologists tested Aaron and pronounced he had an IQ of about minus 15 and a vocabulary of “ball, bus, shoe” and mostly echolalic phrases like: “You Okay?” “Ready, set, go” over and over and over and over. Plus, according to the definition of autism, Aaron is not supposed to be able to pretend, to see things from another’s point of view….

So for Aaron to spontaneously ask, “Who are you?” means he was smarter than we ever guessed.

1. Aaron’s certainly seen characters in costume at King’s Island park, Halloween…. He knew someone was inside this big furry costume.

2. Aaron’s surprise and curiosity somehow bypassed his usual communication block or aphasia or whatever stops him.

3. A Question is a higher form of intelligence and verbal communication.

4. Since his pronunciation and delivery was perfect, his problems are NOT that he couldn’t produce the sounds or words. So for all those years of speech therapy we were on the wrong track to get him to practice saying, “ssss” and “rrrrrr”.

So, with no prompts, no year of therapy identifying a “Smokey Bear picture” and practicing his “wwww” sounds to then build those smallest phonemes into the word “who”… Aaron just looks at Smokey and asks, “Who are you?”

What other mysteries can Aaron tell us about who he is and this thing named autism?

Why could Aaron never again say those words? Never.

In Aaron’s whole life, we’ve only had a similar experience one other time. For the curious, it was when a police officer pulled me over for speeding and Aaron looked at the officer and said, “Uh, oh”.

Still cracks me up and took the sting out of the ticket… but that’s another story.

Aaron carries playing cards around with him. He licks them (like in picture), shuffles them, counts them… They are another way he can calm himself. I debated using this picture. I want you to like Aaron and it is risky to show him doing something others would perceive as bizarre. Licking cards is not normal. But, it is a step up from biting his hand and one of my goals of this blog is to tell it like it is, so here’s his picture. I was looking at this picture when the old kindergarten teacher in me thought this would make a great joke.

I imagine Aaron asking, “What is Smokey the Bear’s favorite card game? (answer in the comments)

Tricky eh, I want you to go to the comments and tell us one of your stories about Smokey the Bear? A joke? What experiences have you had with spontaneous communication, vacations?

Check out my challenge partner Alison Golden of The Secret Life of a Warrior Woman: (click here)