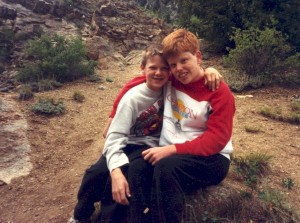 Tommy and Aaron hiking in Smokies

It was the best of times and the worst of times. (Sorry, couldn’t resist.)

All boys and girls grow up into adults. If the statistics are correct that one in 86 children now have the label of autism–that’s a lot of brothers and sisters.

The cute little brothers on the hiking trail grow into … what?

Can the brothers and sisters of people with disabilities, including autism, stay close and involved in their sibling’s life? How does it change over time? Can anyone have a “normal” life?

When we first suspected something was wrong with Aaron we went to the neurologist and began tests. We told him we were thinking of having a second child and he said, “Great, Aaron would love to have a brother or sister.” The tests took 6 months and fortunately for us, we were already pregnant when the neurologist told us Aaron would, “always be in special schools.” (which was his way of saying Aaron had cerebral palsy and was “severely retarded”–though we didn’t know what he meant.) Tommy is 18 months younger than Aaron who later added autism to his list of neurological labels.

I can’t imagine our lives without Tommy. I think God knew our family needed him to help us get through the rough spots. He is a very thoughtful quiet guy, who is one of the most caring people on the planet. He is also a terrific problem solver and continues to be such a source of joy and support to Aaron and all of us.

Aaron is now 43 and Tommy is now 42 years old, but in this picture (Aaron 10 yrs) and Tommy (8 yrs) pose on one of the hiking trails in the Great Smoky Mountains. Sometimes our whole family would go on the hikes, sometimes Tommy and his dad, Tom, would go and spend a couple nights on the trail while Aaron and I stayed in the basecamp.

Thankfully Aaron let me use him for an excuse so I wouldn’t have to hike 10 miles up the mountain, sleep on the ground worrying about bears, and shovel the … you know. Sometimes it was just Aaron and me roughing it in the camper with running water and toilets that flushed. Sometimes my dad or sister Janet joined us at basecamp. It was always a great family adventure (click here).

Tommy has always been involved in Aaron’s life. Until he went to college, they went to school together and were involved in some extra curricular activities together. He certainly had his own friends and activities, but Aaron was involved in his life if it was cheering at his baseball games, watching him play video games or build stereo speakers….

In the last several years Tommy’s job, as a radio frequency engineer, has taken him to South Carolina, North Carolina, Pennsylvania, Virginia and D.C. (Did I mention he was in charge of setting up the cell phone operations for Nascar and the Super Bowl?) 🙂

He recently moved his family back to Cincinnati and is now living between Aaron’s house and our house so we get to see his family almost every week.

Because Tommy has grown up with Aaron, he knows what Aaron likes and dislikes–sometimes even better than mom. 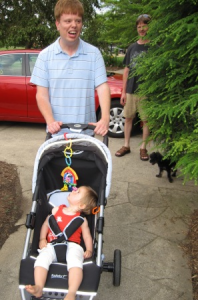 Tommy invited us all to his house yesterday and his wife Ana fixed an amazing dinner. Isabella (1 year) was climbing on Aaron and making him laugh.

Tommy is now an adult who understands the “dignity of risk” (click here) and lets Aaron share his life with his family. Notice that while Aaron is pushing Isabella in the stroller, Tommy is hiding in the bushes making sure everything is okay.

Aaron can independently push Isabella and talk to her (why she was looking at him). He is using his skills. But Tommy is close by. Isabella enjoys her ride with Uncle Aaron and is safe.

I could not have planned for this special moment. I did not have a lesson plan or task analysis. Tommy just figured it out.

What a great brother.

I want to share two stories about brothers and sisters of people with disabilities that have been in the news.

Sister “Deebah” makes a video about her brother

The first video is by Brooke May, a young girl who has a brother Jonathan, with the label of Down syndrome. Let me know your thoughts in the comments, but I see a loving relationship and a sister who reminds me of Tommy.

The second story is an article in Time by the author of Boy Alone: A brother’s memoir (Harper). It is written by Karl Taro Greenfeld who’s father wrote the famous book, A Child Called Noah. It is fascinating to follow this family’s journey into the second generation and the adult world. This article points out some of Noah’s history and does not have the miracle ending we all wish. It suggests the way to survive is to live in the present. It also hints at some of the experiences the author experienced in the past and now in his role as advocate and caregiver for his brother. It is a sober message. Again, please share your comments below.

I love the title! “Growing Old with Autism” (click here)

I remember reading an article where one brother of a person with a severe disability said, “Growing up was like being an only child, with a brother.” When I asked Tommy about this, he was very thoughtful and just nodded.

What do you think? Do you have any stories about brothers and sisters?