What if???| Bob Williams 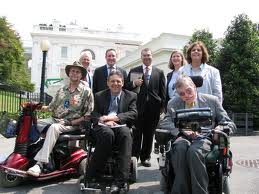 Bob Williams is currently the Special Assistant to the Director of the D.C. Department on Disability Services.

Bob served in the Clinton Administration as Deputy Assistant Secretary for Disability, Aging and Longterm Policy at the U.S. Dept of Health and Human Services, Washington, D.C.

I bet Bob had to program that title into an automatic response button on his augmented communication device *smile*. It would take way too long to say, much less spell out letter by letter.

Because Bob has cerebral palsy and doesn’t speak with words, he knows the importance of augmented and alternative communication.

He wrote the TASH resolution on “The Right to Communicate” (click here).

I first met Bob Williams when we were both serving on the TASH Board of Directors. At first, he seems shy but don’t be fooled–his power is in his message.

Below is a poem he wrote when Facilitated Communication first opened the communication door for many people with autism, including Aaron.

What if
autism is a mistake?

What if
autism really is…

More ours
than theirs.

What if
the Truth

Suddenly all came
gushing out

LIke vinegar spray
or electric shock
from a Sibis*?

What if
they started handing out Nobels

Who do you think
would win more?

What if
autism is a mistake?

Here is a speech Bob gave on Health and Disability (click here).

Bob would be what Seth Godin calls a “linchpin.” He is remarkable and “pokes the box.” He has influenced the President of the United States; laws like ADA, IDEA and the technology act; national policy; parents, self-advocates and everyone he meets. The world is a better place because of Bob Williams.

Did you feel the passion and power of the poem? Any other “What ifs???” in your life? What did you think as you watched the Bob Williams video? Did this make you want to try just a little harder to communicate with people who don’t talk with words?

Related Post: The Right to Communicate| Wretches and Jabberers