Drinking Beer and the Dignity of Risk 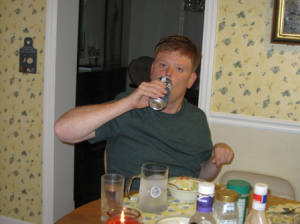 Drinking Beer and the Dignity of Risk

Above is a picture of Aaron drinking a “cold one.” He’s 35 years old–so he’s well past the drinking age. But is this right?

The only time my husband drinks beer is when we have spaghetti for dinner. I don’t know if it is a tradition, a ritual, a family memory, or just some sensory combination he thinks tastes good. He can’t explain it.

The last time we were eating spaghetti, Aaron reached over and picked up Tom’s frosted mug and took a sip. Tom and I both watched his eyes get big with surprise–it was not what he expected.

Now, maybe we are horrible parents that we would let our son, with severe disabilities and the label of autism, drink an alcoholic beverage. After all beer is not recommended on the food pyramid. But over the years, we have tried to allow Aaron to have what the professionals call, “the dignity of risk.”

The concept of “dignity of risk” is we allow our children, and ourselves, to make choices and the accompanying mistakes, failures… because this is how we learn. This is how we build our self-esteem and self-worth. Our Dignity.

Here is a related story about Aaron and his niece Isabella. (click here) Isabella’s safety was a priority. But with supervision, Uncle Aaron could have the dignity of pushing her in her stroller.

This is a difficult concept for many people to understand. Some people think Tom and I are reckless parents. An equal number think we are “hovering” parents and too protective. But hey, if you are a parent of a child with a severe disability, you know you can’t win. You have to do things as you see them.

Dignity of Risk and School

When Aaron was about 12 years old, one of his daily jobs was to help pack his lunch for school. He couldn’t do the whole job, but we worked with him, and over time, he learned to get a soft drink can and put it in his lunchbox.

This was a great goal because Aaron is always thirsty and loves pop. Getting a pop can and putting it in his lunchbox was a task that was repeated every day, so he got lots of practice. Aaron has physical balance issues and hates to bend over. The physical therapist recommended we put the pop on the middle shelf because it would strengthen some muscle or another….

It took Aaron a long time to master this goal, but he did it. It became part of our daily routine. And a source of pride.

The Dignity of Risk and Unexpected Circumstances

One day about noon I got a phone call from the school principal. He said, “Students are not allowed to bring beer to school.” Then he paused and burst into laughter.

The principal then described the lunch scene where Aaron is sitting on the cafeteria benches with about a hundred other junior high school kids.

Aaron opens his lunchbox, and with his peanut butter and jelly sandwich and apple slices he pulls out a Bud Light. (I couldn’t make this up.)

Of course, the crowd went wild. By the time the teachers could figure out what the pandemonium was about, Aaron was a school legend.

Thankfully the principal knew Aaron and he wasn’t suspended.
Apparently, Aaron didn’t put his normal soda in his lunch box.

So then, was this a colossal failure and we stopped allowing Aaron to pack his lunch? No, his daily goal was amended to include sorting and classifying the silver cans before he put one into his lunchbox. Great learning opportunity, not failure.

On the night of this picture, Aaron gave the beer back to his dad. We thought that was the end of it, but then he picked up the beer can, put it to his lips and said, “AHHHHH”.

Guess the spaghetti and beer tradition is genetic.

What do you think of the “Dignity of Risk”? Do you have any stories to share? Embarrassing Learning Experiences?

Alison Golden of The Secret Life of a Warrior Woman is my partner in this challenge: (click here to check out her new post.)