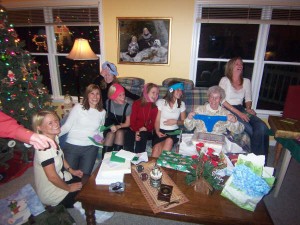 Grandma gets a Thong

Helen Otten, my mom, died April 3 at the age of almost 93. I’m posting this in her memory. I’m also reminded of the importance of family.

The twelfth day of Christmas is Jan. 6th–Little Christmas, The Feast of the Magi.

Actually, it’s all the Magi’s fault. They are the ones credited with giving the first gifts.

Based on the number of people in line at the return desks last week, I’d say many people had problems with their gifts. (Actually I could see Mary and Joseph thinking the gold was useful, they could buy a wagon or better donkey, but what were they supposed to do with Frankincense and Myrrh. Myrrh–really????)

I know it is supposed to be the “thought that counts,” but it really is much more. Gifts are a whole cultural phenomenon.

Recently she’s had hip replacement surgery and has trouble shopping for herself.

Two months before Christmas she told me she wanted slippers. Slippers it is. I don’t have to guess her gift. And this is great…EXCEPT

Every day for the next month she would call me on the phone (usually at 6 AM because that is when she wakes up and is thinking about slippers) and define what kind of slippers. They had to have rubber soles so she could wear them outside if she wanted. And this is great…EXCEPT

She couldn’t tell me her size. It seems some Large slippers are size 8-9, some Larges are size 9-10. And the manufacture, design, model, production all make a difference.

I went to three different stores and brought her “Pair number one” on Thanksgiving. She didn’t even try them on. Which actually made it easier to exchange them, which is great…EXCEPT

She really wanted black. But none of the stores made black slippers. So, I picked out some navy size 8’s and 9’s and 10’s, and some pink (everything she owns is pink) in a size 8-9, and 9-10. And I figured I’d give her a choice. Which was great…EXCEPT

She decided she wanted slippers that weren’t slip-ons. “Only the devil would make slippers with open backs” and she has had slippers that covered her whole foot, well–her whole life. And, she thinks she has ugly toes, so–none of those slippers with toe cut-outs. So, I boxed up and returned the slippers. And it was great…EXCEPT

The next three stores didn’t have black or whole foot slippers. But they did have navy.

You know where this is going, right?

Yep, I rebought her the same slippers (that she wouldn’t even try on) from the first round. She opened them on Christmas and said they were perfect.

So, it makes you wonder.

Was the gift really about slippers at all?

Grandma and the Thong

The picture above is from a previous Christmas. My sister Martha worked in a lingerie store and gave each of the girl cousins a pair of thongs. They thought they were nice. Certainly something practical they could use. EXCEPT

She also gave one to Grandma.

The gift became an urban legend in our family. It brought down the house.

Even though mom didn’t even recognize the thong as underwear—it was the shared experience with her grandkids that made it the perfect gift.

Which again makes me wonder about gifts.

This Christmas Aaron went to a Christmas Party sponsored by a local non-profit. These are kind folks. Many of the people with severe disabilities are the poorest people in the county and don’t even have family members who can give them gifts. So, this is not only a nice gesture, it is an opportunity for these poor souls to get a little something extra.

This year the non-profit got items donated by local businesses to give as gifts. Over 150 adults with disabilities came to the Christmas Party and Dance.

There are so few recreation opportunities, many of the people put on their best clothes and showed up early. Many more wanted to come, but there was little transportation and they depend on staff–who didn’t want to bother.

At the party, even though they arrived early, there were only chairs for 100 people. So Aaron and Jack, his roommate, had to stand and hold their coats.

Since Aaron has balance problems, and couldn’t understand why he couldn’t sit down (people were guarding their chairs) he started biting his hand and pinching others. Not good behavior at a party.

Their staff person made the sensible decision to leave (even more people were coming in the already over-crowded room). Aaron and Jack were each given a “gift bag” at the exit. Which was nice… EXCEPT

The gift bag had a pair of donated slippers. Yea! I would be laughing too, slippers… EXCEPT

The slippers were size 11.

Now, no one with balance issues is safe wearing a pair of slippers two sizes too big. And, unlike my mother, these slippers were charity—donated. So there was no gift card or receipt, most people had no dutiful daughter, family or staff who cared to make an exchange.

And, Aaron couldn’t understand why anyone would give him slippers he couldn’t use. So he just carried the slippers around the house—making me crazy that good, kind people could be so dumb. After all who is the “intellectually challenged” person here? Did they think they wouldn’t notice the slippers didn’t fit? Or all people wear size 11?

Is “Just getting something to open” the point? Even if they can’t use it?

If you plan a charitable event and are giving gifts:

Don’t just arbitrarily pass out slippers, or coats, or T-shirts with misspelled words.

Don’t give radios with no batteries—because they want to use the radio that minute and staff often won’t be bothered with batteries.

Don’t give them things you couldn’t sell or are broken.

Don’t make your interaction a one-time-event.

Do have a party with chairs and refreshments for everyone.

Do get to know people as individuals

Do think about what YOU would want to get

Do think about normalization, age-appropriate entertainment and gifts.

Do think about transportation and staff and family members

Do consider that the shared experience, like Grandma getting the Thong, may be the best gift ever—no excepts.

Okay, best/worst gift stories? Am I just being an ungrateful jerk? What is the role of charity? Is it appropriate to give broken, torn things to Goodwill/charity? Only 258 shopping days until Christmas????