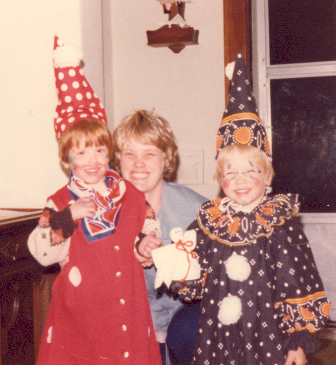 Are they adorable, or what?

Aaron and Tommy always loved Halloween. Me too. The holiday is such a great way to build an inclusive community.

There were some segregated, handicap only Halloween parties for just kids with autism and developmental disabilities, but I wanted Aaron to be part of his community. With a little preparation and a lot of team effort it worked.

When Aaron was 8 and Tommy 6 years old we lived in a great neighborhood with lots of kids (click here for related story) and Halloween was something special.

In the picture above, check out Tommy’s hand. He is holding the ghosts we made and handed out for Trick or Treat.

We took a Tootsie Pop, wrapped a white tissue around the round top, tied it with orange yarn, and with a magic marker added two eyes.

Cute, something homemade and the kids loved them.

One of the most important concepts in special education is the idea of partial participation. If someone can’t do the whole activity, could they at least partially participate and do some smaller part?

For instance: Aaron, Tommy and I all worked on the Tootsie Pop Ghosts for a couple evenings before Halloween.

Aaron’s job was to take the tissue out of the box.

In addition, sometimes he would hold the stick of the Tootsie Roll Pop while Tommy added the tissue. My job was to tie the yarn. It was a team effort, an inclusive experience.

We each did a part of the whole project. We each partially participated.

Aaron contributed what he could do. He could pull the tissues out of the tissue box independently.

He could hold the stick with assistance, and only for about a short time. Because he was a valued team member he contributed as long as he could.

Tommy, on the other hand, could have pulled out the tissues as well as most of the rest of the tasks. But what made this activity fun was the fact we all worked together. We wanted everyone to play their part.

Tommy had more skills than Aaron, and more tasks in the activity. He got to choose when he did them, but they had to be done before Halloween Day. I could have forced him to finish all the eyes in one sitting–but then it would have been work and Mom’s timeline.

Instead he got to make his own decision and chose to finish them while he watched The Transformers, Electric Company and Scooby Doo on TV–his timeline.

He finished up the ghosts by adding the eyes and jamming the stick of the finished ghost into a shoe box lid so the ghosts would “float.” He chose the time, was self-motivated and had the satisfaction of seeing the job to the end.

We made enough ghosts so both Aaron and Tommy could take them to their classes at school. They were always a big hit and I think they were proud they worked on them.

On Halloween night, Tommy went with all his friends in a crowd of ghosts, clowns and monsters. He was gone for hours and filled his pillow sack as full as he could. One of the neighborhood mothers kept an eye out for Tommy.

Usually Aaron and I would go to the immediate neighbors while Dad manned the front door of our house.

One person could not be three places at once: with Tommy, with Aaron and at the front door. We really needed our neighbor, our community resource, to help us out.

This particular Halloween Aaron learned about doorbells. We went to each house and I would point so Aaron would know where to press and he would just smile as the ding, or ring, or buzz sounded. He had a great time. Cause and effect. Press the button–hear a funny sound.

The neighbors were always very kind and generous because they knew Aaron. If I prompted him with, “Aaron what do you say?” he would respond, “Thank you” and give them a smile. It really was a way they could get to know Aaron and we could build our community relationships.

We only went to about 10 houses because of all the excitement, plus maneuvering the steps and the dark was a lot of sensory stuff to handle. But Aaron really seemed to understand and enjoy the routine: Go to house…climb up the steps…ring the bell…get candy…say thank you…repeat.

It was a fun night.

What wasn’t so fun was the next night. See, Aaron learned the routine really, really well. Too well.

So, the next day guess what? I was busy taking the groceries out of the car, when I looked up Aaron had somehow gotten to the house next door, rang the doorbell, and was waiting for some candy.

It took me longer than my neighbor to figure out what was going on. She just smiled, reached in her extras from the night before and handed Aaron a chocolate bar. I could have hugged her.

Tommy to the Rescue

Tommy thought the whole scene was hysterical. Our whole family laughed about Aaron’s behavior at the dinner table but we knew we had a problem. How were we going to teach Aaron that Halloween only came one day a year? Why was it okay to do something one day–but not the next?

Tommy came up with the solution. He suggested we put away all the Halloween decorations and candy. And sure enough, it worked. Without all the reminders, Aaron moved on to other things.

This Halloween, Tommy will be taking his baby girl Trick or Treating for the first time. And Aaron, he will be passing out Tootsie Pop ghosts when the neighbor kids come to his house.

Tell us some of your Halloween stories and memories? Stories of partial participation, over-generalization, community building…