On the last day of Junior School| Inclusion 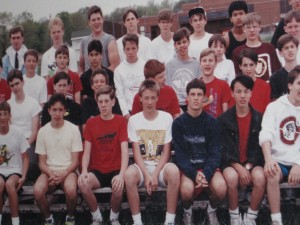 Tommy is in the second row. Of course, Aaron is the red head in the middle of the picture who refused to look at the camera.

My last post Teachers| Inclusion or Segregation started an interesting discussion. It reminded me of the letter I wrote to the Principal of Hopewell Junior School:

Letter to Principal on Last Day of Jr. High School

Recently my nephew, Robert, started laughing hysterically when I mentioned his cousin; Aaron was going to be on the school cross-country team. “What’s Aaron going to do? Bite and push all the kids at the starting line so he can win?”

I was deeply hurt but tried to explain it wasn’t all about the winning but the trying that was important. Robert was shocked! “But why would you even try if you knew you couldn’t win?”

Different Kinds of Winners and Losers

I explained there were different kinds of “winning.” Aaron has autism but he also has the need for belonging to a group and regular exercise. Robert stared blank-faced, and after several more minutes I changed the subject. To this gifted 14 year old, who has above-average good looks, athletic ability and intelligence, this made no sense. Sigh.

Robert, Tommy (Aaron’s brother) and their peers are the people on whom Aaron will always be dependent. They are the next generation of parents, professionals, neighbors and…coaches.

The experiences and value systems they are developing in school, in the community, on the cross country teams–right this minute—will directly affecting Aaron’s future.

Robert has never gone to public school, run on an inclusive cross-country team or been friends with people with physical and intellectual challenges. Obviously, even his experiences with his cousin have made little impact. I think that is a deficit in his education. It will impact his future as a member of his family and community. It’s not a visible “D” on his report card, but it is an invisible “deficit” and loss in his life.

Who are the Winners and Losers?

How do you teach that the person who comes in first is not always the biggest winner? Can children learn it takes courage for not just children with challenges, but for all the boys and girls who finish near the end?

WINNERS are sometime those who RISK losing…being laughed at…coming in last.

Each nation decides what is normal, average and gifted. They decide who are the winners and the losers.

Recently, we’ve been stunned by news accounts which demonstrate how the values in Iran, China, and Russia are different from our own. We have also witnessed incredible changes in philosophy, public opinion and policy. Values are fluid, changing and dependent on multiple factors.

The rights of citizens are gifts from a nation to their citizens. These rights and freedoms cannot be taken for granted.

The tragedy of having a child with a disability has nothing to do with the child, a syndrome, disease or label. The tragedy comes from the struggle with people in your family, community, country who decide if they will accept and support your family or rejected and isolate you.

Whether the differences are overlooked or emphasized. Whether the winners are only the ones who come in first.

“But Wait until Junior High”

When we went to court in 1979 (Cincinnati Public Schools) to allow Aaron to go to the public school, the doomsayers predicted, “MAYBE it would work in elementary school…But wait until Junior High!”

The teachers care only about academics, the sports are so competitive, the kids are so cruel–during lunch they will put drugs in your child’s milk”

They hatefully wanted to frighten us into accepting the segregated school and a segregated life.

Today is our last day at Hopewell Junior School and happily those predictions are laughable. Thanks to the vision and caring of the administration, staff, teachers–especially Miss Linda Lee–and the other students in the school Aaron and his classmates have had a great experience.

They are the first class of people with significant disabilities who have been able to attend a regular public school. It has been a new experience for everyone and it has been a success.

Aaron has had many opportunities for learning functional skills which will help him live, work and participate in the community. But more importantly, he has had opportunities to be “included as a regular student.”

There were some who wondered why a kid, who can hardly talk, much less sing, would practice and perform on stage with the school chorus?

Why someone who has severe balance and flexibility problems would try to participate on the cross-county and track team?

They wonder if it be would have been safer if Aaron rode the “handicapped bus” with an extra aide, instead of the regular bus with his brother?

They will never understand why we hate Special Olympics?

These parents, students and community members can’t figure out what could Aaron possibly get out of an assembly, or six minutes in regular homeroom?

The answer to most of these questions then and now is really WE Don’t KNOW!

The schools are changing the future

Aaron has gifts, strengths and talents and when given opportunities for learning–determination and pride. We do have observations.

Each time a schoolmate says, “Hi” and forces Aaron to give eye contact, each time a teammate said, “Go Aaron, you can make it!” or gives him a high 5–it is a victory.

Each time they see Aaron make it over a creek or down a hill we celebrate.

Every time they see him complete his vocational job stacking juice cartons in the lunchroom, sorting the silverware, filling the pop machines–it is a value enhancing experience. Aaron can learn to do jobs, that if he didn’t do them, someone else would.

A general education high school student cared enough to help Aaron participate in a bowling league. And then, he took him to the Eighth Grade Dance whose theme was “That’s What Friends are For.” A First!

Aaron’ name (granted it was a name stamp) was on the class t-shirt. A First!

Aaron got a school letter in cross country and track, including being in the team picture. A First!

Aaron got his first paycheck from his vocational training site, Grote bakery, allowing him to become a taxpayer. A jump-up-and-down first!

A whole lot of Learning

To me, these shifts in school philosophy, values and focus on inclusion are every bit as dramatic as the Berlin wall coming down.

In the current evolution to merge special and general education, to change special separate classes into a system of inclusive classes with support services for ALL children–the new ideas, opportunities, choices, risks and freedoms are truly exciting.

Hopewell Junior School has given Aaron and Tommy the chance to be winners. The chance to show that sometimes the biggest lessons are not just in the classroom.

Their success has been a victory.

Hopefully, in this human race, our world will become a better place because of the mix of people who grow up more fully with the experiences of community inclusion.

Thanks for your continued support. Thanks for making Hopewell—a Well of Hope.

Junior High turned out to be one of the best times in Aaron and Tommy’s lives. They both had caring teachers who looked at each of their individual needs. I wish we could find out what memories the other students had of their time with Aaron and Tommy in cross-county, track, bowling, choir, gym… I bet they would have some funny stories. I wish them all well.

ps. We often think of how the students are going to grow up and be the next voters, taxpayers, citizens… but we often forget the school staff also evolves. Aaron’s teacher, Miss Lee went on to become a district supervisor and Dr. Taylor, the prinicpal, is the current Superintendent of Lakota. I like to think their experiences with Aaron and Tommy influence who they are today.

Were kids with autism and severe disabilities included in your school? Do you have any thoughts to share? What do you think the future looks like?

A related story is What is Inclusion? plus, pictures of Aaron and Tommy at graduation.