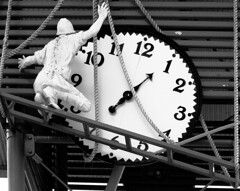 This is Part 8 in a series of posts about moving my son Aaron, who has the label of autism, from one county to the adjoining county where we live. If you want the background click on Searching for a Roommate: Medicaid Waiver Style| Part 7

The clock is still ticking: we are asking for an extention until Sept. 31.

Ulrich HUD System Change Recommendation: All counties and states should use the same forms and the same rules/regulations. There is a time and place for state’s rights; it shouldn’t be on a federal program like HUD.

It would be so much easier on everyone if all the regulations and timelines were the same everywhere, not different in each county, each state. Then when a person looked for information on HUD.gov – they would find the information, not—each county has to explain “their” rules and regulations. Much confusion and time and wasted, and it is unnecessary. i.e. one county says you have to apply by the first of the month, another anytime….
I remember when PL 94-142 (Education for Handicapped Children Act) was passed in 1975. (Hey, I’m old.) Each school district in each state developed their own IEP forms. The idea was to give local control and not “impose” Federal regulations. Phooey. Parents and advocates then spent the next 10 years making sure the districts forms complied with Federal Law. It would have been sooooo much easier to have one Federal form, like they do now. Why take 35 years to figure that out?

Ulrich System Change Recommendation: When a person is moving into a county they should be assigned ONE Support Coordinator, even if it is just for the transition into the county.

In our old county, we have had the same Support Coordinator for over 15 years, or forever in Disability World terms. She knows Aaron, she knows us. We love her and I think she loves us. She has followed our journey and helped us in innumerable ways, including talking to me when I need to vent and problem solve. We trust her judgment implicitly. When we actually move to the new county, one of the biggest losses we will feel is losing this dear friend and ally.

In the new county, Susan, our Support Coordinator du jour, reminded me of our beloved Support Coordinator from the old county. Susan called us and asked about Aaron, she even went to visit Aaron in his new day program at Goodwill/Easter Seals. She spent about an hour with Aaron and his Day Program Supervisor. (This got her great first hand information and brownie points from us.) This bought trust and loyalty from us.

Ulrich System Change Recommendation: Before the Support Coordinator or County Administrator tries to match potential roommates, they need to meet the person and family.

I know this is the day of on-line dating and matchmaking, but even if the Support Coordinators have Aaron’s ISP (Individual Service Plan—the adult version of the IEP), paperwork will never substitute for meeting the actual person.

In the comments from Part 7, two people recommended each county setting up a sort of online match site. It makes an interesting idea.

Tom and I were pleased and excited when we learned the house we were visiting was literally within walking distance of our home. It was a large 60’s ranch with 4 Bedrooms, 2 Bath, sunken Living Room and even a family room. It was brick, had a fenced yard and was on a cul-de-sac with sidewalks. A city park was only a block away. Perfect, eh?

The house belonged to the parent of a young person in the County DD program. The county was desperate to find a ranch in our part of town and these parents said they could rent the house until their child grew up and could live there. Perfect, eh?

Susan said both the potential roommates were about Aaron’s age. I’m not really into labels, so I didn’t ask, and she didn’t offer. She said the county was only going to put 3 people max. in the house, even though there were 4 bedrooms. She said it was unusual to have a male and female as housemates, but it was working well in this situation. The one person mostly stayed in the living room, the other mostly the family room. They had only been living together for about 6 months. Perfect, eh?
She said the parents were active in their children’s lives. The one mom painted the common rooms (kitchen, living, dining and family rooms) and furnished the family room with new couches, flat screen TV….. The other parent bought the washer/dryer and furnished the living and dining rooms with new furniture. They took their children home for holidays and special occasions and visited them each week. Perfect, eh?

She thought Aaron’s loud non-stop talking would not be a problem because the house was big enough, he could find his own favorite place to hang out. She said the two people liked to be out-and-about in the community and there would always be two staff people during all awake hours, so if one person wanted to stay home, it was possible, but Aaron would be able to be active. Perfect, eh?

I thought that was a great idea–the less confusion the better. If the house was not going to work, then there was no point in getting Aaron and the other two people upset.
Susan, and two administrators of the residential company met with Tom and I one afternoon. We toured the house. We did a quick ecological assessment.

Love, love, love the neighborhood and the fact that it is so close to our house. Lot of good things: nice floor plan, solid construction, good lighting and windows, two patios in the fenced back yard. There was new carpet and the kitchen had some new appliances.

But, the sunken living room did not have any railing or protection around the one foot drop. They had an 8×11 piece of paper taped to the floor that said, “Watch your step” but that wasn’t going to work with Aaron. He would need a protective railing across the 7 foot entrance to the living room and dining room, plus a railing to get down into the living room and up into the dining room. (Hope that made sense—the living room was one foot down from the hallway and the dining room.) If this house was to be used for the long term housing of people with disabilities, it would be a good idea to level the floor. There was no basement, so insulation over the slab would make the room more comfortable if the floor was leveled out.

The new furniture the parents bought took up the entire living room floor space. The coffee table was so large, you had to walk sideways around it to get to the other side of the room or to even sit on the couch. Aaron cannot walk sideways.

The new furniture in the family room was more accessible and Aaron wouldn’t have to climb up and down steps and risk toppling over the edge, so we thought Aaron might spend his time in the family room, but that meant he would not have access to the largest room in the house.

The bathrooms were an issue. The master bath was off the master bedroom. So, Aaron would have to go through the young man’s room to take a shower. The shower was probably 50 years old and wasn’t just old, it didn’t look clean. There was clutter on the floor. I worried that Aaron would not be able to just walk into the bathroom and god knows, we have enough toileting issues.

The second bathroom was long and skinny and was off the hallway. It was also not clean and had not been remodeled since the house was built. A staff person would have a difficult time helping Aaron take a bath/shower and help him with toileting—there was no room.

The bathroom in the hall was used by the young woman. There was a plastic stick-up bar in the shower which didn’t look sturdy.

We talked about the bathrooms being remodeled. After all, the first rule of advocacy is to ask for changes up front, before you sign the line, when you have more power.
The young woman’s bedroom was painted and decorated in her own bright pink. It had a personality and looked like a happy place 🙂

The smallest extra bedroom had an exercise bike in it and a closet with shelves, but no hanging rod.

The other was smaller than his current bedroom, had a bed for the staff and a regular size closet. So if Aaron moved in, he would take the bedroom with the regular closet and move the staff.

The visit was cordial. There was some potential for a match, so we decided to set up a visit the next Wednesday evening, when Aaron could join us to meet the young people and their families. The woman in charge of the residential company was expecting a baby (to be born the next day) and her second in command said she would set it up and email me. Susan, was going on vacation but was enthusiastic this would be a good match. We all left hopeful.

Tom and I both were surprised that they had two staff in the house at all times, and yet the bathrooms were so dirty and the house looked upkept. And…they knew we were coming. We wondered if that meant anything? Would these staff be any better than the ones we had now? Would there be a caring staff person like our favorite staff person, who has loved Aaron and looked out for him for the past 8 years?

Would they allow Aaron to bring in his things and carve out a living area? Or, would Aaron be like an invader?
What would Aaron think about living with a young woman? Since most of his current staff were women, would he see a difference?

It would be nice to have parents that were willing to help with the maintenance, painting, buying furniture…. We are all looking for long-term placements for our children in safe neighborhoods. But, what would they say the first time Aaron spilled stuff, or had a toileting accident on the new sofa?

Susan, said she would ask the landlord about accepting the Section 8 housing choice voucher, but we worried about that too?

So, stay tuned. All kinds of interesting things happened the next Wed. evening.

TEASER: The young man turns out to be Andy. Yea, the person from House #2 who punched a hole in the wall and drove the van into two of the neighbor’s houses.

“Life is either a daring adventure, or nothing at all.” Helen Keller.

Any thoughts? I love for you to share your stories in the comments and social media. What would you look for when you were trying to find a home for your child? Many parents of typical kids help their children paint and buy a room of furniture, maybe some appliances. Can you see a difference in what a parent must do, if your child has a disability?

Would it make a difference if Aaron was in the home first and he got to choose the second/third person?