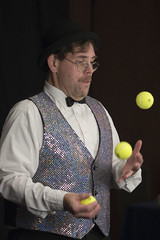 This is Part 6 in a series of posts about moving my son Aaron, who has the label of autism, from one county to the adjoining county where we live.

Ball One in the Air: HUD

May-July County Board of DD set up three home visits with potential housemates for Aaron.

July 15 Met with HUD counselor in the receiving county and completed paperwork.

July 16 Asked for our first 30 day extension from sending county.

Aug. 8 Asked for our second 30 day extension and now have until the end of Sept.

After the third step, the person has a list of landlords who will accept the Section 8 rent subsidy and it makes sense that they find a place within the 120 day timeline.

After the third step, the person has to begin another complicated process with the County Board of Development Disabilities, to find accessible housing for people with disabilities, match a housemate.

Ball Two in the Air: Medicaid Waiver level of Funding

This is where the 120 day timeline become freakin’ scary. It is not a coincidence to me that the deadline is on October 31—Halloween.

Ball Three in the Air: Housemate

Aaron has had the same housemate for over thirteen years. They have gotten along great. This was one of the reasons that, when everything else was going wrong, we stayed in the current residential setting. Aaron and Jack are pals. This will be the hardest part of leaving the old house.

Finding a good match will also be the most important and most difficult part of moving to a new house.

As I tell our story of the three houses and housemates we have visited, just remember: I COULDN’T MAKE THIS UP.

We met with the parents of the potential roommate/housemate at Bob Evans restaurant. The meeting went well so we decided to get the two young men together the next day. Their son also has autism and just graduated from school.

The parents renovated the house and it was nice, but extremely small. The location was on the other end of the county.

I’m not sure it would even meet the minimum requirements for a HUD rental because the bathroom was so small and inaccessible. I’m talking sitting on the toilet and touching the tub with your knees. There is no way the staff person could give Aaron a shower–there is no room.

Our hearts went out to this family who were trying to do the best they could. Their son was a lovely person, but was not a good match for Aaron. Aaron sank on the couch and was biting his hands and was overwhelmed during the visit. Later when I begged Aaron to use facilitated communication and tell us anything, the only thing he typed was “bad.”

A representative of a small family run residential service company was also there. She seemed nice, but she couldn’t give me much information about her company other than the owner just had some family issues.

We learned the young man did not have enough funding with his Medicaid Waiver for full-time residential help, so the family brought him back to their house three days a week. This was why they were desperately seeking a roommate with a Medicaid Waiver because then the split costs would allow the two men to live in the home 24/7.

The residential services company and the county case worker come with the house–(one per house). So, when we asked about the case worker we were told the parents really liked him because he shared with them that one of the potential housemates was a convicted felon, and they were so grateful he told them (when he didn’t/shouldn’t have) and they could make sure their son was safe. (RED FLAG).

Parents are trying to problem solve the best they can to provide for their family.

They wanted to be actively involved in their son’s life.

This family could afford to purchase a small house, near their home.

They could afford to renovate, furnish it and make sure it was maintained with lawn care….

They couldn’t afford the residential care 24/7.

Potential housemates could be convicted felons. Case workers may/may not have to tell you.

Parents could take their child home a couple days a week if the Medicaid Waiver funding was inadequate.

When I asked the parents what their son thought of the 4
day/3 day arrangement they responded: “Well, our son gets confused, he is really excited to be in his own place and would rather stay there.”

When I asked the parents what they thought of the arrangement, they said:
“We have taken care of him for over 20 years with no help. His mother couldn’t work and took him to all his therapies, gave him his bath and entertained him. We never had any help, so 4 days a week is the best it’s ever been.”

These parents were fellow pioneers. Tom and I would have loved if it would have worked out for Aaron and their son to be roommates, but our priority is Aaron—not, would we enjoy being with these parents.

Next post, I’ll talk about the second home we visited.

The bottom line is: WHO WOULD AARON WANT FOR A HOUSEMATE?

Any thoughts? I love for you to share your stories in the comments and social media.

Have you ever had to blend the requirements of two/three/four agencies?

Is this useful information? OR, is this like watching your parents show slides of their summer vacation in Death Valley?—boring.

Home More than a Place

Balancing my Son’s Needs and Mine