Should I rent a billboard? Finding roommates | Part 9 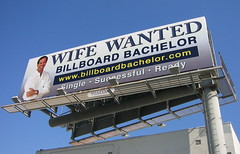 Should I rent a billboard| Medicaid Waiver Roommates Part 9

This is Part 9 in a series of posts about moving my son Aaron, who has the label of autism, from his current residence to the county where we live. If you want the background click on Searching for a Roommate: Medicaid Waiver Style| Part 8

In Part 8, my husband, Tom, and I met with two representatives of the residential company’s administration and our County Support Coordinator. We did a quick tour and saw enough good things to want to set a follow-up meeting where Aaron would get to meet the two potential roommates, Andy and Bea.

Yes sir, Andy is the Andy who had the problems in House #2. Disability World is a small place.

The staff decided a picnic at the house might be a fun way for everyone to meet. Aaron likes picnics, and the informal atmosphere sounded good, so we set the date for 6 PM on a Wednesday evening.

Both sets of parents emailed me and welcomed us the next day. The staff said they would grill hotdogs and hamburgers. I offered to bring the dessert. The other parents brought salad, and macaroni and cheese. Bea’s and Andy’s parents, plus each of them had a sister who was coming.

In our previous experiences, the family members did not use email and it was difficult to communicate. I was excited this was so easy.

The professionals were not going to be able to come but we were looking forward to meeting the two young people and talking with their families.

I didn’t know how many people and they said they didn’t have any food allergies, so we brought two gallons of ice cream (one chocolate with nuts, another Neapolitan) some fancy butter cookies, plastic bowls and plasticware. These were Aaron’s favorite, and since we wanted to impress them, came from the best bakery/ice cream parlor in town. (Really, you didn’t think I was going to bake them myself????)

I also wanted lots of extras because most people with disabilities don’t have many extras after their food stamps run out.

I called Aaron’s house and ask them to clean him up after his day at the day program and the staff had Aaron shaved, in clean clothes and spit shined. He looked terrific.

Aaron was a little surprised we were picking him up on a Wednesday night, and I told the staff person we were going to a picnic with some new friends. (True, but not the whole story.)

The staff at his current home knew we have been very unhappy, but we didn’t want to tip our hand about Aaron potentially moving because:

1. We were still in the exploring stage.

3. We knew they would blow everything out of proportion.

Andy and Bea met us at the door when we knocked. I was thrilled. This seemed so “normal” and respectful. I thought, finally, the staff must “get” the idea that this is Andy and Bea’s home and they would be the ones to greet visitors. It gave me the warm fuzzy feeling of welcome.

We were invited into the family room and the place had lots of energy, noise and … lots of people. I think it scared Aaron.

We met Andy and Bea’s parents and sisters and were about to sit down, when one of the staff people ushered us out to the back yard.

It was a beautiful day, but was hot. The big yard was pie-shaped and fenced. We gravitated to one of the patios in the shade. I thought this was great because it would give Aaron some breathing room and his loud “You okay?” would not be as annoying outside.

Apparently, the residential company decided to make this a group picnic and social get-together for several of the people they served.

So, besides Andy and Bea, there were probably 6 other people with disabilities and their staff who were playing cornhole, badminton and other outside games in the grass. So, over 25 people.

They explained the residential houses often did leisure activities together in the evening and on weekends. They said the staff shifted between the houses and everyone knew everyone. This made staff changes and emergencies easier to handle and gave more opportunities for friendships and leisure activities for the people with disabilities.

I was okay with this, but questioned whether this was the best way to introduce Aaron to Andy and Bea when we had so much to talk about. I thought the staff should have asked if we thought all these people would upset Aaron.

One staff person was smoking at a table on the patio. This surprised me. Ohio does not allow staff to smoke in the houses, so technically this was not against the law, but it was so casual, I got the feeling it was common practice.

Everyone was very friendly, but it was too much for Aaron. He began to get very agitated and bite his hands.

Tom and I gave him his baseball cards to comfort himself, but there were not any chairs outside. We stood on the patio and watched as one of the head residential staff started up the grill.

The grill was in terrible shape. It was a gas grill that no longer worked, so they put charcoal where the grill element used to be. They also didn’t seem to have the long spatula and were using regular pot holders. I decided a new grill might be a good housewarming gift if Aaron decided to move in.

The staff person who was supposed to bring the meat was late, and then forgot the meat, so by the time the meat was finished it was after 7PM, the games had become tedious and all the people with disabilities were HUNGRY.

Someone found a plastic chair for Aaron, but he was not a happy person. He kept saying, “You okay, you okay” in his usual manner, but it made the other people uncomfortable and ask about him.

Mental Note: Add some outside chairs to the list of things to buy for the house.

They asked if Aaron wanted to play the games, but he just bit harder and this scared some people.

Tom and I alternated taking Aaron for walks around the house. This helped him calm down, but Aaron really wanted to eat.

We noticed a dead tree in the front yard, lots of weeds, and there were two cars parked on the front lawn. Now granted there was lots of company and most people parked on the driveway or street, but we have had trouble with staff before who thought it was okay to park on the grass.

For this first hour, Andy and Bea were nowhere to be seen. We did have some lovely conversation with Andy and Bea’s parents. Typical parent talk: Where did our children go to school? How long have they lived away from home? What did they like to do? How often did the parents take their child home? What Doctors? Where did they go to day program?

When the food was finally ready, one of the staff persons asked Aaron if he wanted to eat in the dining room with Andy and Bea and some of the other young people.

I thought this was nice and gave Tom and I a chance to be with the other families in the family room. The staff gave us lots of privacy (if you can ignore 25 people walking in and out of the kitchen and family room).

No one used the living room (there was too much furniture—no one could move around). Did anyone else notice this? At some future time would I need to talk to Bea’s mom about getting a smaller coffee table?

Over our baked beans, mac and cheese and hamburgers, the other parents loosened up. Now, we were starting to get the real story about their children, the house, the landlord, the county….

Some of it was good. They liked Susan, the Support Coordinator; they thought the Residential company did a good job. Their families and Andy and Bea seemed to get along well. All positives.

And yes, here is where we got the story about the van wreck. We suspected Andy was the person from the previous house, but his mom told us the whole story and it sounded like the staff supervision was a big part of the problem.

Bea’s mom has some health issues and was worried that her daughter get comfortable in her own place in case something happened to her.

Both families shared their thoughts and worries.

Aaron is loud, would Andy get aggressive or upset when he was trying to watch his big screen TV?

Would he be protective of “His” room and furniture?

Would they allow Aaron to bring in his things and carve out a living area? Or, would Aaron be like an invader?

Could Aaron bring his own couch? What would they say the first time Aaron spilled stuff, or had a toileting accident on their new sofa?

These were all concerns that would need further discussion. All of us were honest and thoughtful; we were all trying to figure out what was the best for our children. I wish Aaron, Bea and Andy could use words and tell us more what they were thinking.

Would the residential provider promise us good stuff and then only see Aaron as a “cash cow” like the previous company?

The biggest concerns were about the landlord.

When we asked about remodeling the bathrooms, they thought it was a great idea, but thought the landlord may/may not be interested, even if it was at no cost to them. RED FLAG!

Bea’s mother bought a sturdy stainless steel bar for the shower, but the landlord still hadn’t given permission to hang it. (It was on the top of the refridge in the kitchen.) Meanwhile Bea struggled taking a shower. RED FLAG!

I asked if they thought the landlord would take a HUD housing choice voucher and they said they couldn’t even guess. RED RED FLAG!

I asked about the dead tree in the front yard and waist high weeds. They said the landlord contracted the grass cutting to the county agency, but didn’t do anything else to the yard. RED FLAG!

The parents said if they could, they would move their children to another house because the landlord was so unpredictable. SCARLET FLAG!

I sent emails thanking everyone.

Susan was still on vacation. The head of the residential company was still in the hospital with her new baby.

It was a long shot that it would be a match. There were just too many variables.

The hard part was the week wait; no one would even talk with us.

If everyone decided to move forward, the next step would be for Aaron to go and spend an hour or so with Andy and Bea without us.

And, of course, all week Aaron’s current residential provider went crazy asking us questions. We told them we were looking, the same as we told them before. We told them we had no idea how long this would take. But it was awkward and emotional.

After everyone got back from vacation, having babies… Susan talked with us and said the families were concerned it was just too much change for their children.

Nothing against Aaron, but they didn’t think a third roommate was a good idea at this time.

Aaron would not be a good match.

Tom and I had pretty much come to the same conclusion. But, it is still hard to be rejected.

So back to the county…start again…and face the ticking clock.

Any thoughts? I love for you to share your stories in the comments and social media.

Is the dating or matchmaker analogy appropriate? Should I rent a billboard?