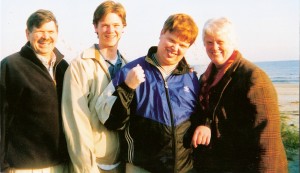 Today I will be interviewed on The Inclusive Class on Special Needs Talk Radio on the topic: Successful Inclusion.

Listen to internet radio with SpecialNeedsTalkRadio on Blog Talk Radio

This is the third interview in their series on Inclusion. The interview is about 20 minutes long. I hope you will leave comments here, talk to your friends and use your social media to spread the word on Twitter, Facebook, Google Plus, DIGG….

Like many people, I began my journey into Disability World when Aaron, my oldest son, received his first label of autism and intellectual disability because he didn’t reach the developmental milestones.

Fortunately, Aaron was born right as PL 94-142 (The Education of All Handicapped Children Act—the precursor of IDEA) was passed. He and Neill Roncker were the first students with severe disabilities to go to Cincinnati Public Schools. Neill’s case (Roncker v. Walter) went all the way to the Federal Supreme Court, ours was resolved locally because the school district didn’t want a class action lawsuit.

I was fortunate to learn about inclusion from the people at TASH (Equity, Opportunity and Inclusion for People with Disabilities–formerly The Association for Persons with Severe Handicaps).

Most of my life was spent as a mom and advocate. When Aaron moved into his own house, I went back to school to get my masters and doctorate degrees in special education at the age of 50. I taught at Miami University and am still fighting the good fight for adult inclusive services for my son who is now 36 years old.

We’ve had some success stories that warm our hearts, and we work every day to make Aaron’s life more inclusive. We are currently working to move Aaron closer to our home.

1. Roncker v. Walters was the first court case under the Education of All Handicapped Children Act to go to the Federal Supreme Court about the Least Restrictive Environment. What effect did it have on what we now call inclusion?

Neill Roncker and my son Aaron both lived in Cincinnati Public School District. Neill was a year older than Aaron.

“In a case where the segregated facility is considered superior, the court should determine whether the services which make that placement superior could be feasibly provided in a non-segregated setting. If they can, the placement in the segregated school would be inappropriate under the Act” (Roncker v. Walters 700F.2d 1058 6th Circuit).

Since Roncker there have been many cases on “mainstreaming,” “least restrictive environment” and “inclusion.”

Remember in the 70s-80s, we were just trying to get our children to be considered: “persons”; “capable of learning”; “potential employees” and to be allowed to go in the door of the public schools.

The term “inclusion” had not been invented yet.

The Roncker case was important for many reasons: it showed the congressional intent of education in the least restrictive environment; the rights of parents to go due process; and the courts responsibility to hear the evidence in education cases as well as consider class action lawsuits. The question of costs was also to be a consideration. These were critical milestones which affected future cases like Daniel R. R., Timothy W. and many other cases.

To avoid a “class action” case, Cincinnati Public Schools settled on Aaron’s case after we won our first due process hearing. Aaron was allowed to go to a public school. Long story, but my husband was a teacher in Cincinnati Public and because of harassment for Aaron and our family, we moved to another school district a year after we won the right to go to public school.

2. Can you share a couple of those Aaron success stories?

Our family researched the 5 counties in our area which included 3 states. We found one school district where both our children could go to the same school. After our three year battle with our school district and hundreds of confrontations with angry parents and teachers, our first success story was on Aaron and Tommy’s first day in our new district.

The yellow school bus pulled up in front of our new house and both our boys got on the same bus to go to the same school. No bands playing, no angry protestors, just four neighborhood kids waiting on the corner.

One young man who was about 9 years old, who had known Aaron for all of ten minutes, reached out his hand to help Aaron get up the steps of the bus. No one asked him–no one gave him an inservice or lecture on attitudes toward people with disabilities–he just instinctively gave Aaron his hand to boost him up.

That was when I knew Aaron was going to be fine. A helping hand–isn’t that all we were ever asking for?

If you want to see a picture of this moment, click on the historical slide show from the Minnesota DD Planning Council’s Parallels in Time 2. Aaron getting on bus his first day in an inclusive school.

Aaron and Tommy attended school together for almost their entire educational experience. Tommy is one of the most sensitive caring people I know and is now a radio frequency engineer with Sprint. They shared many activities together.

Aaron participated in inclusive social, emotional, some academic and after-school activities: Boy Scouts, the prom, the junior high dance, track/cross country, chorus, the environmental club, Friendship club, bowling, work study/vocational job club, and many other school activities. On my blog, I wrote about the graduation ceremony (link below).

If you want more information about A Place to Learn, check out the Parallels in Time 2. It is wonderful.

3. When you were teaching the “inclusion” courses at the university, what did the education students think about inclusion?

It was interesting. Most of the university students who went to school with people with severe intellectual and developmental disabilities couldn’t understand what the big deal was. The students who came from private schools where there was no diversity, were confused and uncertain how inclusion could work. I’m hoping my class made a difference, I’m hoping the next generation of students will have the learning opportunity to be voters, friends, neighbors, co-workers and bus riders with others who are different from them. As our world becomes more diverse, this will be a critical life lesson.

4. Some school districts call a school an “inclusion” school and all the students in the school have IEPs. Does that meet the definition of inclusion?

NO! Some school districts just make up their own definitions. Other districts “dump” kids in classes with no support services. Last year I went to supervise student teachers in an “inclusion” school and was shocked that everyone in the school was on an IEP. Check out Michael Giangreco’s article and terrific comics: “Moving Toward Inclusion.”

5. Why do you think inclusion is a civil rights issue?

The reason we have the term inclusion is because we have had exclusion, segregation and inequality. Senator Lowell Weicker said, “As a society we have treated people with disabiliteis as inferiors and made them unwelcome…”

If you have any doubt, check out Parallels in Time I ” a website on the history of people with disabilities.

In Brown v. Board of Education (1954) “separate is inherently unequal” says it all.

Check out “What is Inclusion?” on my blog ClimbingEveryMountain.com and see Aaron and Tommy in their graduation pictures.

Again, here is the link for the interview: The Inclusive Class: Successful Inclusion with Mary E. Ulrich

Share some of your inclusion stories and let
us know what you are thinking. Will you listen to other interviews on The Inclusive Class? I’ll pass on your ideas to Nicole and Terri.

Here are their websites: