St. Nick and the Batman socks

St. Nick and the Batman Socks 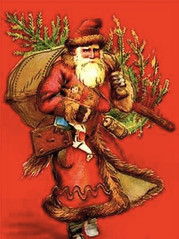 In Christmas 1981, Cincinnati Public Schools was involved in two class-action lawsuits. Our family was caught up in both of them.

The first concerned the right of Aaron, our then seven year old son, who had an IQ below fifty and the labels of autism and intellectual disability, to be able to attend public school instead of a segregated handicapped-only school, “with his own kind.”

The second lawsuit was about racial segregation and the development of “magnet schools” to bring together children of different races, socio-economic backgrounds, and learning styles. We voluntarily enrolled our youngest son, Tommy, age five, into Sands’ Montessori School in the inner city to promote desegregation.

While the lawyers thought the two cases were different, our family knew they were both about building an inclusive community, valuing diversity, and learning from each other.

One of our first lessons about diversity came on St. Nick’s Feastday, Dec. 6th.

In true German tradition, the evening before St. Nick’s Feastday, Tommy wrote letters to Santa for both himself and Aaron, tucked them inside their shoes and placed them outside their bedroom door.

The next morning, Tommy was thrilled to find St. Nick left a note asking him to help spread the spirit of Christmas, be nice to his mother (ah-hem), a couple of candy bars and a pair of Batman socks.

Tommy was always shy. But he was so excited to show off his Batman socks he strutted in front of the mirror, decided his pants covered too much of the socks, and tucked his pants legs inside his socks. Batman socks ruled!

I of course, thought this was darling, took pictures for his Kindergarten scrapbook and drove him to school thinking I was one terrific mom, er, St. Nick.

Tommy joined his class, and I was hanging out with the school secretaries when Tommy’s teacher called into the office asking me to come to the kindergarten room. Over the PA I could hear Tommy sobbing and the rest of the children clearly agitated.

It took a couple of minutes to sort out the details, but apparently Tommy had proudly shown his Batman socks at Show and Tell.

What he learned was no one else in the class had ever heard of St. Nick. And what was worse, St. Nick did not pick up anyone else’s note to Santa. So using sophisticated kindergarten logic, that meant no one–except Tommy–was going to get anything for Christmas.

Further, Tommy felt terrible he hadn’t told them about St. Nick. He reckoned this mess was all his fault. He was “not spreading Christmas cheer” as he had been told in St. Nick’s message, so Santa would be mad at him and not give him anything either.

Tommy’s tear-streaked face would have been bad enough, but he was curled under a desk in the corner with his bare feet hanging out. His Batman socks were inside-out in the garbage can.

Well, this was clearly a kindergarten disaster of monumental proportions. Tommy’s caring teacher and I exchanged those adult looks that said we were supposed to fix this. We settled the children.

I brought Tommy back into the circle, held him in my lap and reassured two other children who were sitting nearby.

Stone SoupThe moral of the story is if we think in terms of “gifts” instead of “scarcity,” and if we see the unique beauty in our differences, customs and traditions, we will all have a richer life.

After the teacher finished the story, I fumbled out a few words about our class being a community just like the people in the story.

Sometimes our family or religious traditions are not familiar to everyone. Just like each of the families in the story Stone Soup, our class was full of families that could contribute special stories and traditions to celebrate the holidays.

(Kindergartners are very generous in allowing grown-ups to tell stories to make themselves feel better.)

I told them St. Nick came to our house because we were of German descent. I asked if anyone else had other traditions around the holidays and one student told the story of Kwanzaa, another about Hanukkah. I reassured everyone they needed to talk with their families about their holiday traditions, but that if Santa brought them gifts last year, he would surely bring them gifts this year.

As I looked around the circle at these children I had come to love, it dawned on me this was not the all-white, German Catholic, middle-class community school in which I had grown up.

This was exactly the kind of learning experience we wished for our sons.

Intellectually, I knew this was why we chose this school. This sharing was the gift of diversity and inclusion.

But this was more. This experience was a transformational moment for me, Tommy and perhaps some of the students.

The next day I brought in the ingredients for our own version of Stone Soup— “Building Community Snack Mix” and gave each of the students a Batman sticker.
For more information click on the community building mix.

Tommy did get his Batman socks out of the garbage can. He wore them all kindergarten and into first grade until they were faded and had a hole in the heel. The Batman socks are part of his childhood legacy.

Each year, for the last thirty years, we have placed the worn, torn Batman socks on our Christmas tree.

Now Tommy has a little girl of his own.

I want to wait a couple Christmases. But when our grandbaby goes to Kindergarten, the Batman socks are again going back to Tommy for his St. Nick’s Day present.

Hopefully, the story of “St. Nick and the Batman Socks” will become a cherished tradition to share with his daughter…and will continue to teach about diversity, community building and inclusion.

All the best, Mary