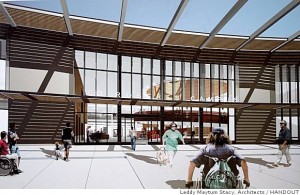 Thanks to everyone who Tweeted, Facebooked (is that a word?) and otherwise shared information about Ed Roberts and his first official memorial day in California

The Ed Roberts Campus at Berekley California is open. The campus uses Universal Design and is built for EVERYONE. Here is an article about how the architect had to think differently about successful design. It is across the street from a fully accessible transportation system. Win-Win.

We had a great response to reformating the historical videos into segments for YouTube. We are creating a plan for moving forword. As we get news, I’ll pass it on. Thanks to everyone who so generously contributed in any way to this important project.

The Inclusion and Disability Rights Movement has come a long way, yet we have so much farther to go.

Ed Roberts often joked that in the first 14 years of his life he was “just an ordinary kid.” He was more interested in sports than in school work and wanted to be a professional baseball player when he grew up. That all changed.

In 1953, before the vaccine, Ed contracted polio. Overnight he became paralyzed from the neck down and required an iron lung, which he used the rest of his life.

One of Ed’s greatest talents was being able to look at a situation, and ADAPT.

Ed decided a baseball career was out, and became a straight A student in High School.

When all the students stared at him, he decided this was an attitude problem. Instead of being embarrassed, this was how it must feel to be famous. In time, he reframed the whole experience, adapted, and decided he would pretend to become a famous movie star.

Indeed he did become a star. How fitting we are now trying to get his video on YouTube. I think he would get a bang out of that.

This would also be a good tip for people who are being stared out. Parents, Caregivers, Teachers could all adapt this strategy and help “reframe” those stares into stars!

I just saw a video (2010) where a teacher and class used Skype to help one of the students who had cancer keep up with what was happening at school.

When Ed Roberts got Polio, (1952) he was quarantined and had to listen to his classes over the telephone. Think of the differences.

Skype would have been amazing to him.

When Ed returned to school after missing almost two years of school, he felt like a stranger. Not only had he changed physically, he was now paralyzed, but he carried the stigma of “polio” and having a “Quarantined” sign on his front door.

It’s nice when students send get well cards, but including the student on Skype shows another dimension of caring.
BTW: home with Skype is the least restictive environment for this child at this time.

The new Technology Act will make other learning opportunities available for people of all ages. Who knows what the future may hold.

Any other tips for reframing embarrassing situations Stares into Stars? Any other uses of technology you would recommend? What would you want if you had to miss school for a long time?

Keep Climbing: Onward and Upward.
All the best,