In my class, “Introduction to Exceptionalities,” we read an article by Paul Longmore about the social construction of disabilities. The point being that the traditional “medical paradigm” points the disability finger at the person– they are defective and need to be fixed. The new paradigm of “social construction” puts the focus on the culture/society as the ones who need the fixing.

We are the culture, we are the society. And, through the courts, the legislature and individual everyday advocacy we help move society toward inclusion or back toward segregation and the medical paradigm.

Paul, like Ed Roberts, also had polio as a child. Our class watched a video on YouTube where Paul praised Ed Roberts. It reminded me of this post I wrote on the first Ed Roberts Day in California and challenged me to be courageous and follow the examples of both Ed and Paul.

And for what it’s worth, not one student in either of my classes had ever heard of Jerry Lewis. I thought that was a hoot!

In the United States we celebrate the birthdays of great civil rights leaders. Two of them are Martin Luther King and Ed Roberts. Most Americans know of Dr. King’s achievements but few know of Ed Roberts, the “Father of the Independent Living Movement” for people with disabilities. 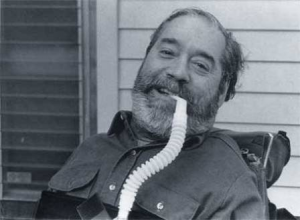 California is the first state to officially designate January 23, 2011 as Ed Roberts’ Day. This is an opportunity for the media, public and private citizens to learn about Ed Roberts and the 50 million Americans living with disabilities.

But this day is about more than celebrating the life of a great American and pioneer in the civil rights movement of people with disabilities. This is a day to embrace Ed Roberts’ challenge to “Be Extraordinary!”

Ed Roberts often joked he started his life “just an ordinary kid” who was more interested in sports than school work. That all changed.

In 1953, when Ed was fourteen, he contracted polio. Overnight he became paralyzed from the neck down and required an iron lung, which he used the rest of his life.

One of Ed’s greatest talents was being able to see the possibilities, and adapt. When Ed got comfortable with his new body, he figured a baseball career was out but he knew he could still use his mind.

Ed became an Advocate for Himself and Others.

His mother, Zona Roberts, listened and helped him advocate for his own rights. When a high school administrator threatened to deny him a diploma because he couldn’t take physical education and driver’s education, Ed appealed to the school board and won.

He learned sometimes you adapt, but other times you fight discrimination and stand up for justice and equality.

When he entered the University of California at Berkeley (UCB), the newspaper ran an article saying, “Helpless Cripple Enters UCB.” Others might think he was a “helpless cripple,” but Ed knew better.

When physical barriers, like steps, prevented him from entering buildings, and other students were losing critical support services, Ed helped organize a protest which established the first student-led disability support services program at a university.

Ed got his BA and MA in Political Science. He finished all the coursework for his Doctorate (ABD) and taught at UCB for six years.

Ed Roberts paved the way for thousands of students with disabilities to go into higher education.

Ed married his college sweetheart and despite the medical doctors saying it was impossible, they had a beautiful son who was the pride of Ed’s life.

Who Decides? The Birth of Self-Determination.

He believed people with disabilities were “People First” who could speak for themselves and tell you what they liked, disliked, wanted, and needed. Instead of discrediting their knowledge, Ed and the Disability Rights self-advocates raised their voices and demanded to be heard.

Ed Roberts created the paradigm shift from Pity and Charity to Dignity and Self-Determination.

As I talked about in another post, Ed challenged these core attitudes of What is charity? (click here)

Ed fought for the first curb cut. When the city bureaucrats asked, “Why do we need curb cuts when we never see people in wheelchairs on the streets?” Ed calmly explained that was circular logic. This conversation was repeated in cities all over the country until the passage of the American’s with Disabilities Act (1990) required accessibility as a civil right.

Accessibility was more than just curb cuts. Ed worked for access to technology, transportation, jobs, voting, housing, inclusion in regular schools and every part of life. With Olmstead, he advocated to free people with disabilities from nursing homes and institutions.

Universal Design changes the attitude of charity. Accessible buildings, transportation systems, learning and education philosophies, communication and technology were NOT just for “poor cripples” they were for everyone.

Ed also understood basic dignity and civil rights were for everyone. After all, people with disabilities cross all ethnic, race, gender and class lines. He met with leaders in the Native American, African American, Women, Seniors, and Hispanic movements.

He created a common dialogue arguing, “All men (and women) are created equal”–including those who use breathing machines, wheelchairs, Braille and communication boards.

When those first curb cuts were made, all of a sudden it was easier for people with baby strollers, bikes, people who were elderly and people making deliveries….

Temporarily Able-Bodied or the Yets

This was controversial because many people don’t like to consider they can join the ranks of the disabled in a moment. But again, Ed taught us having a disability is NOT the end of the world. Disability is just a part of the human condition.

Ed helped create the nation’s first Center for Independent Living (CIL) which became the model for the world.

People with disabilities were taught self-help skills and personal responsibility. They learned to not be victims or eternal children, but rather to be adults and take control of their lives.

Gov. Jerry Brown appointed Ed Roberts Director of the Department of Rehabilitation for the state of California in 1975. Ed supported the passage of Section 504 of the Rehabilitation Act and saw many of his ideas implemented. He served until 1983 when he co-founded the World Institute on Disability. He traveled the globe and developed a world-wide movement of, with and for people with disabilities. Ed Roberts really did change the world (as well as many airlines).

Ed died in 1995 from natural causes but his legacy continues with his son, his friends and a thankful nation. The lives of people with disabilities and ALL of us are better because of his spirit, vision and life.

In Ed’s Own Words:

Text of Remarks by Ed Roberts at Section 504 Sit-in Victory Rally in San Francisco on April 30, 1977.

“We have begun to ensure a future for ourselves, and a future for the millions of young people with disabilities, who I think will find a new world as they begin to grow up. Who may not have to suffer the kinds of discrimination we have suffered in our own lives. But that if they do suffer it, they’ll be strong and they’ll fight back.

And that’s the greatest example, that we, who are considered the weakest, the most helpless people in our society, are the strongest, and will not tolerate segregation, will not tolerate a society which sees us as less than whole people. But that we will together, with our friends, will reshape the image that this society has of us.

We are no longer asking for charity, we are demanding our rights.”

Ed Roberts was a pioneer for the civil rights of people with disabilities.

Like Martin Luther King, he had a Dream that celebrates diversity for people of all races, and abilities.

He helped us see the stigma and segregation of disability as meaningless—we are all either “disabled, or the yet to be disabled.” We are all part of the human family and while we need each other, we each want self-determination in our own lives.

The journey toward inclusion continues as we replace the physical and attitudianal barriers of discrimination, segregation and the charity model with inclusion, universal design and civil rights.

Ed Roberts couldn’t walk, couldn’t feed himself, couldn’t dress or shave himself. He couldn’t even breathe by himself. Yet look what he accomplished.

Ed continues to challenge us to see ourselves as perfect –just the way we are. He continues to inspire us with his ideas to Be Extraordinary.

We really have no excuses.

What can YOU do today to spread the word about Ed Roberts and the civil rights movement of people with disabilities?

What can YOU do today to help change physical and attitudinal barriers for ALL people?

Will YOU accept his challenge to also Be Extraordinary ?

Please share your thoughts. Big or small, each action you take will spread the word.