What is Charity and Love? 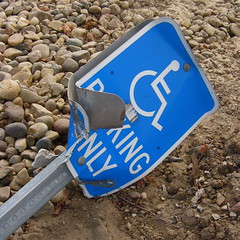 Every day we read about good people planning charity events for people with disabilities.

I’m not sure how I feel about this.

My first fundraiser was when Tommy was an infant, Aaron was 20 months old and still not sleeping through the night. Two hours a day, I would drive them across town to Stepping Stones Center for the Handicapped. Perfect time for me to volunteer to lead the fundraiser, eh?

What pushed me into action was there were about 30 babies in the Stepping Stones program and no teacher. Sure there were amazing volunteers. But these children, who needed so much help, did not have a qualified teacher. I found that unacceptable. I could sleep in a couple years.

The local shopping center was having their annual charity craft show. At the organizational meeting, I gave my impassioned speech, we were chosen the “designated charity” and then for the next month all the parents, grandparents, friends and neighbors of the “Tiny Tots Program” spent our free time making items for our booth. We raised about $3,000 which was then matched by the organization and an official “teacher” was hired.

I met other mothers (mostly) and we had many good times, but I started asking why we had to have charity drives to fund important services other children in the community took for granted.

After our court case and Aaron was finally allowed to go to public school, I got involved in the regular school PTO fundraisers. There were spaghetti dinners, White Elephant sales, Dances, Raffles, Magic Shows, Motorcycle Rides, Bake Sales, Races for… and saving boxtops, cans… It goes on and on.

I learned about inclusion (click here) and realized we didn’t need a “special track team” we only needed an extra support person to help Aaron to participate in the track team events.

This led to more committees, grant writing, working for levy’s for the County Board of Mental Retardation and Developmental Disabilities as well as the regular local school district.

Other parents got to have jobs and earn money to help their families. I got to be the only non-paid person at numerous committee meetings.

Now, we did some great things that wouldn’t have happened without the volunteer parents. We began an after-school club and a summer school program so our children would have something to do and not lose all the skills they gained during the school year. We started four non-profit groups and incorporated. Yes, indeedy, sleep would have to wait.

But it never ends.

It is my feeling many of these organizations spend their energy insuring their own jobs and pay and giving lip service to the support of people they are supposed to be serving.

Autism Speaks, March of Dimes… are currently under fire because one of their main reasons for existence is to raise money to wipe out people with autism and developmental disabilities. They want a cure and spend much of their funds on sending Medical Doctors to conferences and conducting research.

But what about the people who are here now? These professionals, who make good salaries, have their way paid to conferences. Parents, who volunteer, not only pay our own way–we are supposed to donate to send the doctors? Plus, their executive directors make big big bucks. When I learned what some of the executives of these charities were making–that was it.

There are some large organizations who understand this, but most don’t. Here’s a post on my experience outside my grocery store (click here).

Everyone wants to help babies and young children

I know Aaron’s life was more interesting because of my leadership and volunteer work. But now he is an adult, and there are even fewer opportunities. Babies are cute and helpless and of course we want to help. But the majority of our lives we are adults. That’s 20 years as a young person and maybe 50-60 years as an adult.

So, I don’t do much volunteering for charitable organizations any more.

I spend every moment of my life working directly with the people with disabilities or the caregivers on the front lines. The ones who make little more than minimum wage. The people who take Aaron to the bathroom and clean up his messes. The people who celebrate Aaron’s diversity and think he’s a pretty neat guy. There is no tax write-off, no non-profits. Just people who care and need resources.

I don’t believe in onetime events like, “People with Disabilities Come to Church Sunday” where the church rents a ramp for the weekend (I couldn’t make this up). I don’t believe in Special Olympic Golf Fundraisers, when they won’t let Aaron even ride in the golf cart (“Oh, honey we just raise money for these poor children, we don’t actually want them on the course.”–couldn’t make that up either.) I don’t want Girl Scouts showing up at my door saying they want to play with my child because it is Lent and they have to do penance (some day I’ll share the details on that one.)

As Joe Shapiro wrote in his classic book, “NO PITY.” People with disabilities don’t want to be the object of other’s charity. People with disabilities have needs, but they are citizens with rights. They don’t want the handicapped parking place because you are having pity on them. They want the handicapped parking place because as a citizen and consumer, they need the extra wide space so they can get out of their car. And, as an American, I’m proud our country recognizes that right to equal access.

If we really want to help people with disabilities–don’t give them your dimes. Instead make room in your lives and give your love..and your friendship. That is the best gift and, I believe, closer to the Biblical definition of “charity.”

What are your experiences with charity models? With helping people with disabilities? What does it feel like when you are the giver? When you are the receiver? When do you feel pity? Charitable?