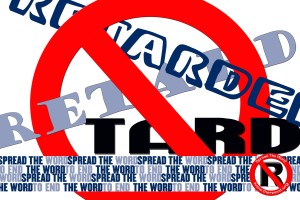 To those of us who care about people with disabilities, it is always shocking to hear about media personalities attacking the vulnerable people we love.

“R” Word Slips of the Tongue

That was bad. But he apologized, and hopefully learned to never use the “r” word again.

Some would argue this was an example of the Politically Correct Police censuring free speech. This would be true if there wasn’t a long and recorded history of discrimination against people with intellectual disabilities. Check out the Parallels in Time website if you have any doubts.

With Rosa’s Law and large organizations like Special Olympics actively challenging the media personalities who use the “R” word publicly, there is a gradual shift in the public’s awareness. This is a giant step to improving the image of people with disabilities.

In another post, The ‘R’ word| A challenge to Bloggers I asked bloggers to not use words that insult people with intellectual disabilities and gave a sample letter which made a difference in one blog.

We all make mistakes, we all can learn to be more sensitive. Sometimes our letters need to educate good people who just haven’t walked in our shoes.

BUT…when public figures purposely insult and promote segregation and prejudice against people with intellectual disabilities and think it is funny or entertaining–that is another story.

The Rover’s Morning Glory radio show was talking about how people with disabilities, using the “r” word to refer to this group of people, cannot and should not hold jobs, are incapable of learning in school (specifically people with Down syndrome) and the disc jockey cringes whenever he hears or sees them out in public. He goes as far as saying when he sees them working in the grocery store, he is disgusted.

Even worse, the radio station chose to re-broadcast this particlular show.

Please use the link below and either call or email the radio station to express your displeasure with their choice of programming.

The only way to do anything is by associating the advertisers and the radio station DIRECTLY with the insulting behavior.

That means calling the advertisers (and getting to the top person) and making it clear your organization and its supporters, AND its nationwide reach, will tell the public that Such-and-Such company supports the insulting, belittling, and marginalization of people who have disabilities. And that WMMS stands for the insulting, etc.

Nothing else will stick. Generally the advertisers could give two hoots about this, because they are reaching a large target audience through the Rover program. WMMS could give two hoots because it is precisely that kind of humor which draws the audience in the first place. So everybody profits at the horrible expense of those who are being ridiculed.

Again, the ONLY way to have an effect is to directly link the radio station and advertisers as being SUPPORTERS of ridicule, prejudice, insult, and marginalization.

Ask the advertiser, “do you support the ridicule, prejudice, insult, and marginalization of people who have mental disabilities? You don’t? Well, we think you do, and we will tell the public. Why? Because you advertise on that radio station, which has now become an outlet for the ridicule of people who have disabilities. And we will directly link YOUR company to that degrading conduct. The only way out of it is to PUBLICLY pull your advertising from WMMS and stand with us. Period.

Take action as you feel appropriate…. Please share with others.

Now it is easy to say, “let the big organizations, or the advocates, or the parents or … take the action.”

ACTION ALERT: A challenge to those who care about people with disabilities

Below is my letter to the radio station in Ohio, I’ll let you know if I get a response.

Here is my email to WMMS:

I was shocked to learn WMMS was insulting people with disabilities and their families on the air.

Many people with Down syndrome and other intellectual disabilities can live, work and go to school in their communities and for your Rover’s Morning Glory radio show to say otherwise is discriminatory.

There are only two kinds of people in the world: the disabled and the “yet-to-be-disabled.” Each one of you and your family members are only one accident, one illness away from having a permanent disability.

Think about it, the insults you hurl not only reflect on you, but on the whole Cleveland community.

If you live long enough—you WILL have a disability. How many of your listeners have family and friends with intellectual and other disabilities?

How many of your sponsors have children or family members with disabilities?

When you target one group of people to degrade, ostracize and alienate as being different from you, you only make yourself look petty and ridiculous. You might think that by putting down people with intellectual disabilities, you are making yourself look better—but in fact, you are degrading yourselves.

I ask you to stop this segregation tactic. People with disabilities have the legal right, and the human right to be part of the community. We will not force them into the backwards of institutions and out of the public eye.

Instead we will celebrate their gifts to our common community. We will embrace them in our human family.

WMMS would not dare insult other minority groups. Why would you pick on these vulnerable people?

You are embarrassing yourselves.

Sincerely,
Mary E. Ulrich Ed.D. and mother of Aaron, a person with an intellectual disability

A media person says the “R” word and then apologizes.

A media person says the “R” word to increase prejudice against people with intellectual disabilities.

I’m hoping you will want to be a part of the solution and take an action step.

Email, Call, Tweet and use your social media resources to spread the word that people with disabilities are just like everyone else and these attacks will not be tolerated.

It will only take a minute. Will you write an email to the radio station?

What do you think about this?