March 2018 is designated “Stop the ‘R’ Word day. If you go to their website they have many ideas for activities and actions. If we each do one thing, we can make a difference for the future of our children. Please share your thoughts and actions in the comments.

David Hinsburger and the “R” word.

David Hinsburger is an award-winning author and advocate for people with disabilities. His article titled: The People who “ARE” the “R” Word is a must read classic for anyone who doesn’t understand what the fuss is all about. 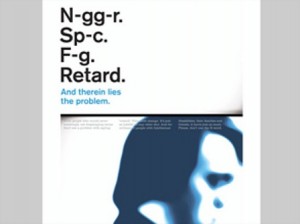 Sticks and Stones and names hurt

As promised in my post “Definitions of “Retarded”, this is the letter I wrote to a major blogger when he used the words “retarded” and “idiot” in one of his posts. It is edited for this post.

I have followed your blog ____ for a long time and enjoy your stories, ideas and writing style. However, I have issues with your use of the words: “retarded, idiot, moron and imbecile.”

You have made strong statements about using whatever words you want–even if they offend people and hit their hot buttons.

You can use words like “idiot, moron, imbecile, crip, tard…,” but why?

I agree this is America and defend your right to freedom of speech. I agree people who find these words offensive can just unsubscribe. But… you are a smart and thoughtful person. Why would you want to purposely offend vulnerable people?

I would rather believe you don’t understand how much these words hurt.

My son has the label of “mental retardation” now called an “intellectual disability.” Because of those two words, he was not allowed to go to public school.

Because of those two words we had to spend three years in court, costing thousands of dollars. We, along with other parents, had to prove our children were human and had the right to “life, liberty and the pursuit of happiness.” We had to prove in court that our son would benefit from being around other people and his mere presence on the school grounds would not harm other children. Because of those two words he was not allowed to participate in swimming lessons with the other kids in our neighborhood PUBLIC park. Because of those two words our family has been refused to be served in a restaurant and a Doctor refused to have our son for a patient…need I go on?

But our problems were minor compared to people with the label of intellectual disability in the past.Parallels in Time: A History of People with Disabilities

Just a generation ago, because of those two words, people were treated as animals instead of humans. They were sterilized, given doses of radioactive materials in their oatmeal. They were taken from their families (“for their own good”) and warehoused in inhuman institutions. Some were not given clothes and had to sleep on straw. They were denied even the most basic human rights–all because one psychologist in one situation gave them one test and labeled them those two words.

Most history books have made people with disabilities invisible. So, you probably aren’t aware, but the words: “moron, idiot and imbecile” came straight from the medical manuals of less than 40 years ago.

There are still churches which will not allow people with the label of those two words to marry, some churches do not even allow “those” children to attend their services or receive the sacraments. Many private schools and churches legally still segregate and discriminate against our children with those two words.

There are many normal couples who joyfully want a baby–until they hear those two words, and then immediately abort. There are Baby Doe cases where if the baby has Down syndrome and is assumed to have mental retardation, the family refuses to take the baby home from the hospital and refuses to allow the baby to have food. There are cases of “wrongful birth” where the parents sue the Doctors for allowing their child with “mental retardation” for being born.

In 2012 we can add the case of baby Amelia Riveria who was refused a transplant because she had an intellectual disability. The hospital has recently apologized.

In Ohio, the state legislature passed a bill in 2009 to remove the words “Mental Retardation” from state agencies and its documents. This was the work of numerous advocates and thousands of hours of public hearings.

This is a civil rights movement where we are fighting for the right of our children to live, work and recreate in the community. The right to be seen as human beings and citizens of this great country.

Sticks and Stones … and words can hurt.

When a label carries enough stigma that the label alone can cause discrimination–the label is a problem.

The civil rights movement of the 60’s laid the ground work for Sec. 504 of the Rehabilitation Act and the Individuals with Disabilities Education Act…. and our civil rights legislation, The American with Disabilities Act (1990). If you look at the closing statements in Brown vs. Board of Education (1954) you will see the school district’s argument, (paraphrased) “If you let negro children in the public schools, the next thing you know the school will have to educate retarded children and Indians.”

In 2012, our children have the right to go to public schools, and restaurants cannot refuse to serve us, or ask us to leave because they don’t like “the way we look”.

This is NOT ancient history. This is NOT some group of radical parents and advocates who just want people to be politically correct.

Churches, non-public schools and organizations can still discriminate and decide who they allow in their churches but because so many of our children are going to school and living with their families in the communities, there is not the fear that once existed. And the medical professionals have dramatically changed their low expectations and acknowledge the limits of the IQ test and other measures they used to label people.

Sure this came about because of civil rights court cases and federal legislation, but mostly it happened as decent people decided to give people who were different a chance. I know it is unpopular to say that the Federal Government and Laws are important. Many people say there is too much government. I wish there was more protections and enforcement for vulnerable people.

Will you take cheap shots and continue hateful language which hurts people? Or, will you use respectful language and recognize people with intellectual disabilities are people and at least give us all a chance to build a better world.

Will you use your power to continue to hurt people, or for change?
I know you didn’t mean to hurt anyone, but for those of us (like me) who have children with IQs below 50, children who were labeled “idiots” by our Doctors and medical professionals and who are struggling every day to try and make a better life for our children, the words: “retarded, idiot, moron, imbecile” are downright offensive. So forgive me that I rant today instead of ignoring it.

I know the words are used everywhere and people aren’t particularly trying to hurt people with intellectual disabilities but I would appreciate your consideration.

The blogger I sent this letter to agreed to not use the offensive language only asking that he remain anonymous. I consider that a victory for all of us, and it has made me a loyal fan.

Rosa’s Law was passed and signed by President Obama in 2009 to use People First language in all Federal documents. Love, NOT Labels| Rosa’s Law

I am hoping other bloggers will take up the challenge and use People First language and the words “intellectual disability” in a respectful way.

This is a fresh start. We can do it right this time.

Will you take the challenge to remove the “R” word and other hurtful words from your vocabulary?

Will you help educate others who use the words?

Will you learn more about PEOPLE FIRST LANGUAGE?

Talk to me in the comments. Let me know what you are thinking.

Remarkable Parents who Never Give Up