With families, “Love” is all that matters–no matter what, unconditionally.

The love we feel for our child, our baby, our sister, brother, son, daughter can never be replaced by a medical or psychological term some professional puts on a chart. So in isolation, it shouldn’t matter if the diagnostic label is “retarded” or “intellectual disability.”

As we spoke about in the post Circle of Life (click here) each person and family is part of a much larger system and what affects one part of the system affects all the parts of the system.

And that is where the chosen word and label does matter–big time.

Yesterday in the related post, “Retarded”–no more (click here) I briefly wrote about Rosa’s Law and showed one of the press releases/alerts sent by parents and advocacy groups to change the words, “retarded” to “intellectual disability.” Some of these advocates are professionals who make their living working with people with disabilities. But like most of the legislation of the last 60 years, Rosa’s Law came about through the vision and hard work of families.

I was going to summarize Senator Mikulski’s Statement on the Introduction of Rosa’s Law (below) but since her words still make me cry, I figured you’d want to see the “primary research document”. Especially check out Nick Marcellino’s comments. And get the Kleenex handy.

This is just one family who went to one more meeting, talked with one more politician–but this time, with a lot of hard work and uniting allies, they changed the system. Maybe it is just a small step in the scheme of things. There are still thousands of people with intellectual disabilities and their families who do not have the services they need. But, this small step gives us all hope that our democratic system works. An individual can make a difference.

It amazes me that in an election year when politicians can’t agree on anything, they unanimously voted for this law. That alone makes it memorable.

What do you think about Rosa and her family? Have you ever been an advocate for change? How, When, Why? How did it feel?

How is this press release different than the one in Retarded–no more?

Rosa Marcellino and her family 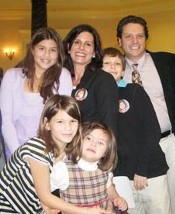 WASHINGTON, D.C. – U.S. Senator Barbara A. Mikulski today introduced Rosa’s Law, a bill that will eliminate the terms “mental retardation” and “mentally retarded” from the federal law books. U.S. Senator Michael B. Enzi (R-Wyo.), Ranking Member of the Health, Education, Labor and Pensions Committee, is the Republican sponsor of the bill.

Senator Mikulski’s statement as delivered on the Senate floor follows:

“Today I rise to introduce legislation that I’m calling Rosa’s Law. This bill began by listening to the people in my own state. It began when a mother told me a compelling story about her own daughter, her family’s efforts to give her daughter an opportunity for an education and to be treated with respect and with dignity. And at the same time, it began with the advocacy of not only she and her husband, but of her entire family, including her 14 year old son Nick who testified at the Maryland General Assembly.

“Last year, at a roundtable on special education, I met Nina Marcellino for the first time. She told me about her daughter Rosa who was labeled at her school some years ago as mentally retarded. She told me about the stigma, the pain, and the anguish it caused both Nina and her husband, Rosa’s brother and sisters as well as the Rosa herself.

Nina and Joseph reached out to their local disability advocacy organization, The Arc, to see what could be done to change the law. They then reached out to a member of the Maryland General Assembly, a wonderful Representative named Ted Sophocleus. He introduced legislation in the General Assembly that would change the word ‘mentally retarded’ and substitute it with the phrase ‘an individual with an intellectual disability.’

“That’s why I stand on the Senate floor today to introduce, at the request of the family, a law on behalf of this little girl and on behalf of all of the children of the United States of America who are labeled, stigmatized and bear a burden the rest of their lives because of the language we use in the law books.

“My law changes the phrase ‘mentally retarded’ to ‘an individual with an intellectual disability’ We did this in health, education and labor policy without in any way negatively impinging upon either the educational or other benefits that these children are entitled to.

‘What you call people is how you treat them. What you call my sister is how you will treat her. If you believe she’s ‘retarded’ it invites taunting, stigma. It invites bullying and it also invites the slammed doors of being treated with respect and dignity.’

“Nick’s words were far more eloquent that day than mine are today. I want to salute Nick for standing up for his sister, but I think we need to stand up for all because in changing the language, we believe that it will be start of new attitudes towards people with intellectual disabilities. Hopefully, people will associate new words with the very able and valuable people that go to school, work, play soccer or live next door.

“Eunice Shriver believed in this when she created the Special Olympics. She knew that special needs children need special attention but they can do very special things, and look what she started. I had the opportunity to talk to Rosa’s mom Nina while this bill was under consideration by the Maryland General Assembly. I promised her then that if that bill passed the Maryland legislature, I would bring it to the floor of the United States Senate.

“Well, it passed unanimously. Governor O’Malley has signed it and today I stand before you introducing the legislation. It makes nominal changes to policy in federal education, health and labor law. It simply substitutes ‘intellectual disability’ for ‘mental retardation.’ This bill will neither expand nor diminish services, rights or educational opportunities. We vetted it with legal counsel. We reached out to the very wonderful advocacy groups in this field and they concur that this legislation would be acceptable.

“This is not the first time we’ve updated this terminology. Our laws once referred to boys and girls as ‘feeble minded.’ We thought we were being advanced when we changed it to ‘mentally retarded’ in the 1960s. Now, 40 years later, let’s take another big step and change it to ‘intellectual disability.’

“I’ve always said that the best ideas come from the people. Rosa’s Law is the perfect example of effective citizen advocacy. A family that pulled together for their own and in pulling together they’re pulling us all along to a new way of thinking. I want to recognize the Marcellino family who is with me in the gallery and the namesake of the law Rosa’s Law pictured behind me. She is also up there today.

“I also want to take the opportunity to thank my colleagues. It was indeed an honor to represent this family. I believe that in our country people have the right to be heard and that we should listen. They have a right to be represented, which I’ve tried to do. And now, let’s try to change the law.

“It was a pleasure to work with Senators Harkin and Enzi, the Chair and Ranking Member of the HELP Committee. I have their wholehearted support. This is going to be a nonpartisan bill. We’re going to check our party hats at the door and move ahead and tip our hat to these boys and girls.

“This bill is driven by a passion for social justice and a compassion for the human condition. We’ve done a lot to come out of the dark ages of institutionalization and exclusion when it comes to people with intellectual disabilities. I urge my colleagues to join me in a step further. Help sponsor the legislation that I offer on a bipartisan basis. Help me pass the law and know that each and every one of us makes a difference. When we work together, we can make change.”