Dedicated to Marine Sgt. John P. Huling of West Chester, OH who was killed in Afganistan just days before his 26th birthday. His mother, Debbie, works with my husband Tom. He was buried at Arlington National Cemetary Memorial Day Weekend, 2012. 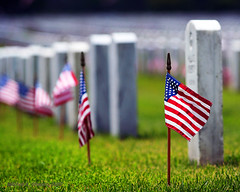 Memorial Day is a celebration across communities in America which helps us remember our basic values and the soldiers who fought and died for them. Usually, it also includes a parade, one of my favorite parts of the holiday.

Several years ago my family sat in lawn chairs in our local cemetery watching the parade of Little League teams, high school marching bands, veterans in uniforms of many wars, and politicians in their red, white and blue ties.

The cemetery was beautiful. The lawns were like carpet. American flags marked each tombstone. The flowers colored the grounds with reds and whites. Everyone was feeling damn patriotic.

Everyone except my uncle John. He turned to me and said, “I wasn’t always handicapped.”

I raised my eyebrows and wondered where this came from. Uncle John was never a happy person, but since he had a stroke, he’d become a weary soul. We’d hoped this celebration would lift his spirits.

Uncle John explained. “You know, I was an electrician. I was important, I contributed, I worked in a great hotel for 30 years. Now I just sit here and watch life go by. I’m handicapped and useless.”

Not exactly a cheerful parade conversation.

I couldn’t resist. “Uncle John, having a handicap isn’t the end of the world. Can you enjoy the parade? Look at those little kids jumping up and down on their decorated wagons.”

And he pointed to my son Aaron, his nephew who has the label of autism.

I felt I needed to say something, but I couldn’t find any words. So in silence, Uncle John, me and Aaron sat side-by-side, almost touching, yet thousands of miles away from each other.

What Attitudes and Freedoms do we Celebrate?

Some of the veterans in the parade were old with worn faces and bodies. Did our society value them?

Some soldiers were younger than Aaron… and their youth was shattered in the deserts and mountains of strange lands.

Some veterans carried labels of “handicapped and disability.”

And as the crowd cheered and waved, I wondered if these brave men and women would ever be truly accepted into our society.

Would others like uncle John say they were “useless”? Would they only see the handicap?

Would they consider these wounded warriors better than people born disabled, because the soldiers were once whole and then “damaged” fighting for our country?

During the ceremony, a soldier in a wheelchair got some sort of award, and the crowd clapped. I wondered if the community would further support him as he integrated back into society, or was his token wall plaque on Memorial Day the end?

Would people segregate, discriminate, and ignore him for the rest of the year?

Would he get the support he needed to live, work, and become part of the community?

I often wonder if everyone understands there are only two groups of people in this world–the disabled, and the yet-to-be-disabled? If we live long enough, each of us will have a disability.

It’s something to think about.

I asked Uncle John if he noticed how the cemetery grounds looked. I told him Aaron worked at this cemetery. He and the landscaping crew had disabilities.

And with support, they weren’t handicapped and “useless.”

In fact, they were the ones who made the grounds look so beautiful.

Uncle John died a couple of months later–old, bitter, and handicapped. He never understood that people with disabilities could do all sorts of things.

And he’d missed the joy, pride, and purpose of the Memorial Day celebration – just like he missed the joy of Aaron and the joys in his own life.

This Memorial Day, I think Aaron and I will wave a couple of flags in celebration of America… both of us competent, contributing members of our community.

Comments: Come on, I know you want to share some memory of your own Memorial Day Parade, family reunion, attitudes about disabilities, and “Handicapped.” You all have lots of ideas, let us know what you are thinking.

Perske talks about people with disabilities and WW2.

Aimee Mullins and Survival of the Fittest