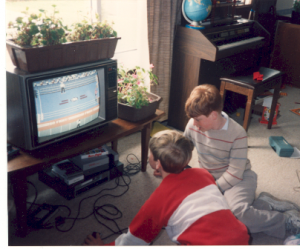 As parents of children with disabilities, it is difficult to know “What is realistic?” “What goals do I want?”. I have always found it helpful to measure “normalization” by comparing the life of my son Tommy with his brother Aaron. Below are my thoughts about summer activities when the boys were young teens. The lessons I learned helped me cherish the final “inclusive” story below. Hope you’ll share your thoughts and success stories.

Went to 2 weeks of Boy Scout camp, an experience which included a hike on the Appalachian Trail.

Had to choose between participating in baseball or soccer which included 2 practices a week and a game. In August he began daily training for the school cross-country team.

Was active in a neighborhood network of five boys who decided to start a Gaming Exchange Club. His friends called him the minute he arrived home from activities, played games until supper.

Was invited to stay overnight with a friend or cousin 3 times and his friends 5 times.

Had a season’s pass to a nearby amusement park and spent at least one day there each week with friends. 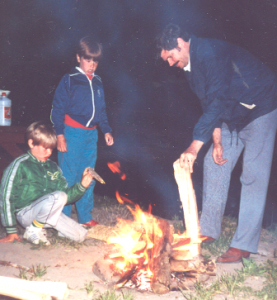 Aaron, age 14, with the label of autism, intellectual and developmental disability:

Aaron’s major activity was watching Tommy play baseball, video games…and riding in the carpool to drop off Tommy and his friends.

Aaron also has a pass to the amusement park, but can only go with an adult (his mother).

Aaron spends every morning saying, “bus, bus … ready, set, go.” When the school bus doesn’t come, he sometimes licks on the front window, bites his hands and puts on his coat and backpack. He can’t figure out why his routine is different from the other 9 months of the year.

He was not invited to overnights with cousins or friends.

* …perhaps we wouldn’t feel so trapped if we could get respite regularly.

* …perhaps we’ll resign ourselves to our community’s “special” camps and “special” recreation programs, which effectively exclude Aaron from almost everything that is typical, regular, easily available and low cost.

* …perhaps hope will sustain us that someday a “community support” agency professional from somewhere, anywhere, could adapt, modify and begin to open community activities for Aaron and others.

* …perhaps/…oh perhaps…some wonderful person will believe that a community is more that a group of houses, businesses and people.

The conflict for people with disabilities and for their families comes when the community limits opportunities, segregates and restricts individuals’ choices (e.g. Handicap swim is Tuesday; 1:30-2:30 p.m. and General swim is Monday to Friday 8:00–5:00). If Aaron had an inclusive swim buddy, Aaron wouldn’t have to go to “handicap swim” but rather the general swim with the other kids.

It doesn’t matter that the limiting of opportunities appears, to have a good rationale or charitable intentions. Segregation limits freedom, limits choices, and limits development.

One hot July day, Tommy and his friends stopped by our house to make some peanut butter and jelly sandwiches for an impromptu picnic.

Five minutes later, all the kids were laughing, talking and riding their bikes to the park. One red-haired kid named Aaron was riding on his bike in tandem with his brother.

In about one hour the picnic ended and they brought Aaron back.

That was the highlight of Aaron’s whole summer.

That moment for Aaron was sort of like the experience of an Olympic ice skater, gymnast, American Idol singer who practices day after day hoping to “bring it all together” for one magic performance or “big break.”

It was a “victory” –a spontaneous, normalized recreation experience, without his mom! Ahhh (smile-sigh).

And now…back to work. But, perhaps, just perhaps…those wonderful, typical neighborhood kids will grow up more fully with the vision for and the experience of community integration and freedom. They are the next generation of soccer coaches, swim instructors, church and scout learners.

America the Beautiful: A Family Vacation, Plus.

Are summers different for kids with and without disabilities where you live? Can you think of anything you could do to help? Any way to include a child in the activities of your children? Any tips to share? Any stories from the 90s? 2012?