Many people have a hard time understanding the concepts of independence vs. interdependence, inclusion, multiple intelligences and cooperative learning. I thought a revision of The Animal School by George Reavis might explain it all.*

Once upon a time the animals got together and decided to start a school.

The parents and teachers wanted to make everything FAIR, so they decided ALL the animals would take ALL the subjects. No exceptions.

The curriculum consisted of classes in swimming, running, flying and climbing. Each student would need a grade of C to pass. There would be a competition to see who could get the best grades.

Doug the duck was excellent in swimming, in fact, better than his instructor. But Doug made only passing grades in flying and was getting Fs in running and climbing.

At a team meeting, it was decided he needed to drop swimming and take remedial classes to practice running.

This continued until Doug the duck’s webbed feet were badly worn and he was only average in swimming.

But average, or C, was acceptable in school, so nobody worried about that—except Doug and his family.

Rene the Rabbit started at the top of her class in running. But she soon had a nervous breakdown because she was failing in climbing and the others made fun of her in flying and swimming classes. She passed the standardized tests but the last day of class she buried her books and said she would drop out.

Sam the Squirrel was excellent in running and climbing. He also had high marks in flying until the teacher read a research study that said everything should be taught from the ground-up, not the tree-top down.

Edward the eagle was the problem child. He bit the other animals in running class. He perseverated on flying. In the climbing class he insisted on using his own way to get to the top of the tree. After several discipline meetings, it was decided his diving into the river for fish would count as swimming credit. He was considered a loner with no friends. “He just keeps flying off,” the teachers complained and suggested he be put in special education.

The chipmunks were excluded from school because they could not pass the prerequisite swimming tests. They protested and demanded digging and burrowing be added to the curriculum. This caused hot debate among the parents and students. The rabbits and squirrels thought digging and burrowing should replace swimming. The ducks thought there should be better discipline and a subject on following the leader.

Even though he got a D in flying, one frog won the student competition and was valedictorian. All the students and their families were unhappy.

Further, the chipmunks boycotted school board meetings and joined the groundhogs and snakes to start a charter school.

Does this fable have a moral? 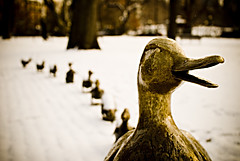 Once upon a time the animals got together and decided to start a school.

The parents and teachers agreed that if the purpose of school is to learn the skills required AFTER graduation, then the students needed a course called “Survival 101.” The school would be at the pond, because that was where they lived.

The school board announced, “Our common survival depends on learning to live interdependently in our community. Lessons need to be differentiated according to each student’s learning styles, gifts and talents.”

The parents and teachers wanted to make everything FAIR, so they decided ALL the animals would have Individualized Education Plans with curriculum goals and objectives.

The teaching methods would be functional activity-based projects which stressed cooperation and problem solving. “Safety at the pond,” was the thematic unit.

There would be individual goals and objectives and each student would work hard, improve on the skills they have, and contribute their talents and strengths to the group project. The stress would be on cooperation and interdependence, rather than competition and independence. There would be no bullying or fighting.

Doug the duck was excellent in swimming, in fact, better than his instructor. Duck was also gifted at getting animals to follow in line.

At a team meeting, it was decided Doug would help supervise all water activities and be the project manager. Doug the duck was excited to be given leadership activities. His goals were: to improve his dive, his endurance swimming across the lake; his life-saving safety skills; and, learn to give specific directions to get the younger ducks in a row.

Rene the Rabbit was a great runner and jumper. Since she was close to the ground, she was in charge of everything on the earth’s surface. She would learn to: identify animal tracks, and, alert squirrel if needed. Because Rene was worried she wouldn’t be able to do her best job, Eagle offered to mentor her.

Sam the Squirrel was excellent in running and climbing. He volunteered to be the lookout and guardian of the trees and wildlife. His goals were to develop safety plans in case of danger. He would run messages, organize safety drills and practice his alarm calls. To help Sam learn to stay on task, he would also be the time keeper at all meetings.

Edward the eagle was excited he could fly. Doug the duck, the project manager, asked him to survey the pond from the air. He wanted Edward to use his “eagle eyes” to scout for trouble, trespassers, pollution, and any animals in trouble. Eagle’s short term goals would be to learn about weather, air pressure, rain and wind.

The chipmunks, snakes and groundhogs were welcomed in the school. They became a part of the community. They gave digging and burrowing tips to squirrel and rabbit. When a fallen tree threatened to block the water flow, they helped dig a channel.

In the course of the year, Doug the duck saved squirrel when he almost drowned. Eagle saved Duck when he got caught in the ice and almost froze. Rene got enough confidence that she wants to be the project director next time. Sam raised the alarm when a group of Girl Scouts came camping and thought it would be fun to catch animals and dress them in hats.

Because all the animals cooperated and learned together, their pond community was a happy and safe place, each animal was respected and valued for their contribution, and, everything was FAIR.

Instead of one standardized test or grades, each animal had gifts, they all survived, learned new skills, made new friends, and could celebrate the true nature of community: interdependence and inclusion.

Does this fable have a moral?

All my best,
Mary

Do you know any Dougs, Renes, Sams or Edwards?

Do you know any students who are excluded and asked to go elsewhere? Are the students treated like individuals? Is the curriculum differentiated? Does everyone feel happy, safe and like valuable members of the community? Are students encouraged to build on their strengths and talents or does everyone have to learn the same things in the same ways? Are the students learning skills that will help them in Survival 101 after graduation?

*Like my husband, George Reavis taught in Cincinnati Public Schools. The original The Animal School was published around 1940 in The Public School Bulletin long before inclusion was even a dream–or was it?