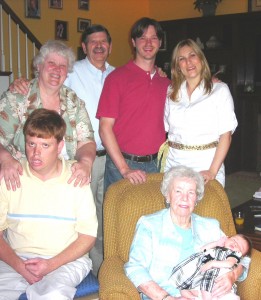 Aaron and 4 Generations of Family

“If you don’t design your own life plan, chances are you’ll fall into someone else’s plan. And guess what they have planned for you? Not much.” – Jim Rohn

I will soon be celebrating my 66th Birthday. I used to think 66 was old. Now I just think 66 is experienced with a lot of living yet to do.

I wonder what the world will be like when Aaron, Tommy, Ana and even little Isabella turn 66? When I blow out my candles, I’m wishing with all my heart the world will be inclusive. And, we’ll all be part of a caring community who values diversity and individual contributions because together we are stronger.

In Part 1: 1981 Aaron was 6 years old and we outlined a vision of what a happy, successful quality of life would look like for Aaron as an adult. (click here).

In Part 2: 1989, Aaron was 14 years old and we were moving forward. The Plan was updated to take into account the changes in our family, but also the changes in special education, disability services and the world. (click here)

In Part 3: 1998 Aaron is 23 years old and moving out of his parent’s house into his own place with a roommate and 24 hour assistance from caregivers. (Click here)

How did we do?

All Dream Plans were built on the concepts of family, community, normalization and inclusion.

Aaron will be educated in a public school with his non-handicapped brother and neighbors. He will have a functional curriculum (see related post) which looks at his needs in his life spaces (vocational, leisure/recreation, domestic, general community functioning). His out-of-school activities will evolve around his family and his own friends, interests and talents. He will be in age-appropriate settings: elementary school ages 5-10; Jr. High ages 11-13, Sr. High ages 14-21, job in the community 21+. He will begin vocational training now, at age 6, so he will be able to perform the job. (If he isn’t able to be a dishwasher, then he can be a dishwasher’s helper, etc… there is some job he will be able to do with success.) At the appropriate time, Aaron will move to a group home to live with others his age. Though dependent in many ways, Aaron will have self-esteem and confidence in the things he does and be a contributor to his family, his extended family, and society.

Aaron was educated in a public school with his brother and the neighbors. After we won our lawsuit with Cincinnati Public Schools, the school district was vindictive and since Tom (Aaron and Tom’s father) was a teacher in the district we decided to move to Lakota School District. Aaron rode the bus to school with the neighborhood kids, he received a functional community based program with some excellent teachers and therapists who used best practice. His out-of-school activities evolved around his family and his own friends, interests and talents. Aaron went to the prom with his friend Jenni, he was on the Jr. High Track and Cross Country team where he earned school letters, he rode horses, swam, went to camp and took summer vacations with his family. He went to family reunions, holiday parties and the high school basketball and football games. He was on an inclusive bowling team and made some friends with the Baseball Team players. He was in the Key Club and had a circle of friends. He received extended school year services. He attended graduation (see related article) and had a celebration for all his family and friends. Aaron went to age-appropriate schools and had a job coach to help him in his job at the police station (vacuuming) and amusement park (watering plants) when he left school. When Aaron was 23 he moved into a house with another person (though he was older) and they have lived together for over 12 years. Aaron is still totally dependent but he has self-esteem and confidence in the things he does. He is loved and is a contributor to his family which now includes a niece and sister-in-law as well as his extended family of grandma and cousins. Aaron votes and is a consumer in our society.

Each one of these sentences is filled with years of work and advocacy. There are a whole lot of buts, buts, and more buts that happened when Aaron turned 21 that we didn’t foresee at age 6….

But considering the mountain we climbed to achieve all of the goals—WE DID IT!

Tommy will be educated in a public school with his handicapped brother and neighbors. He will have a functional curriculum which looks at the needs in his life spaces, (academic, vocational, leisure/recreation, domestic, general community functioning). His out-of-school activities will evolve around his family, his own friends, interests, and talents. He will be in age-appropriate settings. He will make a career choice and pursue training (vocational, university, apprentice…). At a time he decides is appropriate, Tommy will move to his own home, probably marry and begin his own family. He will have self-esteem and confidence in the things he does and be a contributor to his family, his extended family and society.

Tommy went to school with his brother and neighbors. He had a functional curriculum that met his needs. He participated in wrestling, theater, cross-country and track, he went to all the school functions. He was in age-appropriate settings and shadowed adults in careers he was interested in. He began a couple career directions and graduated from Morehead State University with a job in the telecommunications field. He is now a Radio Frequency Engineer working on the new G4 systems. His work experience includes setting up the telecommunications for the Super Bowl and NASCAR events. His bride, Ana, is from Brazil and now they have a baby girl who is 18 months old. Tommy sees Aaron and his extended family every week. He is remodeling his house with his friend. He has self-esteem and confidence in the things he does and is a contributor to his family, his extended family and society.

Tommy is on his own. He has his own responsibilities and we help him every way we can. He is interdependent only because he wants to be. Now he makes his own dream plans for himself and his family. Here is a related article about Tommy and Aaron (Click here)

Aaron… well another post we’ll talk about life after age 22 and adult services.

How are Aaron and Tommy’s dream plans different? At age 6 and age 22 and age 35? age 66? How did they turn out? Were they much different than the plans your parents made for you? Much different than you make for yourself? What would you say is the lesson?