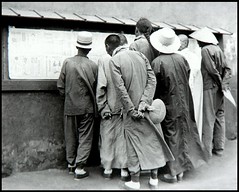 Wretches and Jabberers 100 cities tour on May 12th

Find a city near you and don’t miss this exciting movie about two men who are changing the world for people with autism. Click for cities and ticket information

For related posts on autism, communication and Wretches and Jabberers:

Wretches and Jabberers Review: A jab to the heart.

I love Aaron| I hate Autism

The Right to Communicate (2)| We are the experts

What if? | Bob Williams

For those of us who care about people having the choice to live in the community and not in nursing homes, ADAPT members are marching and being arrested for all of us. See related story

The Disability Law Handbook is written in FAQ format and answers questions about the ADA, the ADA Amendments Act, the Rehabilitation Act, Social Security, the Air Carrier Access Act, the Individuals with Disabilities Education Act, the Civil Rights of Institutionalized Persons Act, and the Fair Housing Act Amendments.

To locate your local ADA Center go to www.adata.org

Does the life of one man with an intellectual disability matter?

At Least Investigate Other Suspect In Lapointe Case
Lapointe Case With DNA findings, state should revisit an earlier suspect

If the term “reasonable doubt” means anything, Richard Lapointe should get a new trial. The meek, uncoordinated, mentally handicapped Manchester man was convicted of a violent crime he may not even have been able to commit, based on confessions of highly dubious merit.

But his efforts to have his case retried suffered another setback Friday when Superior Court Judge John J. Nazzaro rejected arguments that prosecutors had withheld important evidence, that Lapointe’s trial and appellate lawyers were incompetent and that new evidence proved Mr. Lapointe was innocent.

It can’t end here. The Lapointe case has seriously shaken confidence in the state’s criminal justice system. Officials should take a step to restore that trust, and that is to run tests on the other major suspect in the case.

Mr. Lapointe was convicted in 1992 of the brutal rape and murder of his wife’s grandmother, 88-year-old Bernice Martin, in 1987. He wasn’t arrested until 1989; police were first interested in another suspect, a grisly career criminal named Frederick Rodney Merrill. But Merrill was eventually dropped as a suspect, at least in part because his blood type didn’t match a blood and a semen stain at the scene.

Mr. Lapointe, a dishwasher with no history of violent behavior, had been asking Manchester police officers about the case, and eventually drew their suspicion. On the Fourth of July in 1989, the police asked Mr. Lapointe to come down to headquarters and kept him there for more than nine hours. He didn’t have a lawyer and the session was not electronically recorded. Over the course of the evening Mr. Lapointe gave three confessions that were either nonsensical or didn’t jibe in major detail — how Mrs. Martin was dressed, how she was sexually assaulted, how she was strangled — with how experts later said the crime was actually committed.

Yet jury members said after the 1992 trial that it was the confessions that convinced them of Mr. Lapointe’s guilt. Since 1992, much has been learned about false or induced confessions; they happen with alarming frequency. Mr. Lapointe, alone and tired, said he told police what they wanted to hear so he could go to the bathroom and go home.

Whoever killed Mrs. Martin was physically strong. He violently assaulted, tied up, raped and stabbed a woman who was short and weighed at least 160 pounds. Mr. Lapointe can barely tie his shoes, and has trouble lifting heavy objects. He has to keep checking and adjusting a shunt tube that extends from his skull through his neck and into his stomach that drains fluid from his cranial cavity, a result of his mental condition, called Dandy-Walker syndrome. But if he didn’t commit the crime, who did?

There is tantalizing evidence that Manchester police had the right man the first time.

A Manchester woman testified she saw a man much taller than Mr. Lapointe — about Mr. Merrill’s size and build — running madly from the housing complex where Mr. Martin lived at about the time of the crime. Mr. Merrill was seen in the neighborhood that weekend, and three days later committed an eerily similar crime, a violent sexual assault on a woman in her home in South Windsor, just a few miles away.

In the most recent appeal, lawyers for Mr. Lapointe presented DNA evidence that a pubic hair found in Mrs. Martin’s bedroom belonged neither to Mrs. Martin nor Mr. Lapointe, and that a pair of gloves found at the scene could not be tied by DNA to Mr. Lapointe. Although Judge Nazzaro didn’t find this evidence strong enough to grant Mr. Lapointe a new trial, for a number of reasons, he did allow that the pubic hair “may have come from the perpetrator.”

Well, let’s at least find out if the hair and other items found in the apartment are a DNA match with Mr. Merrill. Such action would not be unprecedented. In recent years state’s attorneys have voluntarily reanalyzed evidence in at least three cases in which convictions were reversed. The questions surrounding Mr. Lapointe’s case argue for a similar review.

The success of a movie about two men with autism who are telling their stories and inspiring all of us.

The Richard Lapointe issues of justice and freedom.

The story about self-advocates fighting for Medicaid and their rights to live in the community.

What are your issues? What would you be willing to go to jail for?

“Our lives begin to end the day we become silent about things that matter.” Martin Luther King Jr.

“A small group of thoughtful people could change the world. Indeed, it’s the only thing that ever has.” Margaret Mead